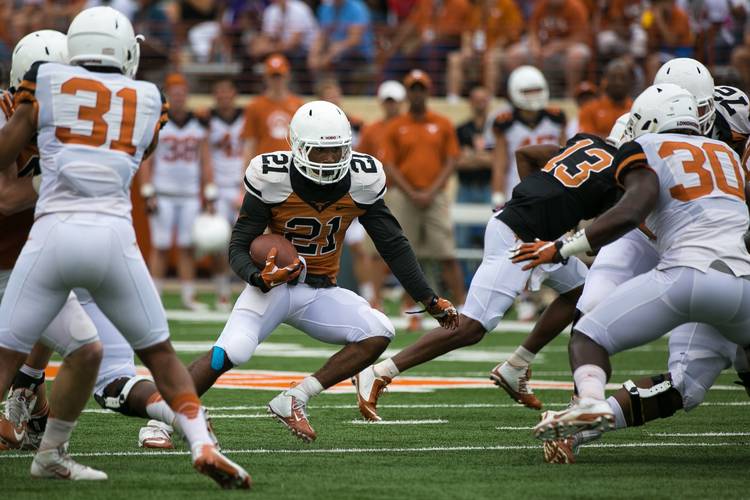 UT running back Duke Catalon (21) runs the ball during the Orange-White Scrimmage at Royal-Memorial Stadium in Austin on April 18, 2015.Lukas Keapproth/AMERICAN-STATESMAN

Tom Herman is thrilled to have former Texas running back Duke Catalon. “Oh, man, he’s the real deal,” Herman said. “He’s as strong and powerful a back as I’ve been around. He’ll give you the tough yards because he’s physical between the tackles, but he’s also great at breaking tackles and making you miss in space. He’s still learning the offense. I expect some really big things out him. Is he a 30-carry-a-game player? Oh, yeah. He may not be quite as fast in the open field as Zeke, but he’s close.”

On the fallout of Augie’s ouster and what it means to long-time assistant coaches Skip Johnson and Butch Harmon:

“Lost in the announcement of Augie Garrido’s dismissal as Texas’ head baseball coach was the potential of additional staff fallout. Skip Johnson, one of the premier pitching coaches in the nation, and hitting coach Tommy Nicholson were told to continue recruiting, and their appointments run through the end of August. Johnson, 49, would love to remain at Texas under a new head coach, and he also would welcome being a candidate to replace Garrido, unlikely though that is. “I’d like to stay here if the new head coach wanted me,” Johnson told me Tuesday. “If they thought I was the right fit, I’d be up for that.” Johnson speaks daily with best friend Tim Tadlock, Texas Tech’s outstanding head coach, who has been mentioned as a successor to Garrido. “I don’t know, but I think he’d be interested in the job,” Johnson said. “I don’t know why he wouldn’t.”

“TCU’s Jim Schlossnagle also should be at or near the top of Mike Perrin’s search list. “Augie is one of those very few legendary coaches that has elevated the game of college baseball,” Schlossnagle said. “Augie raised the bar to the point that places like TCU have had to make more of a commitment to the sport. Personally, he has become a very dear friend and mentor.”

For the rest of Kirk’s 9 Things including his thoughts on why any Big 12 action items will be stalled and Baylor’s new head football coach Jim Grobe, click here.

Kirk and Ced in a live chat Wednesday