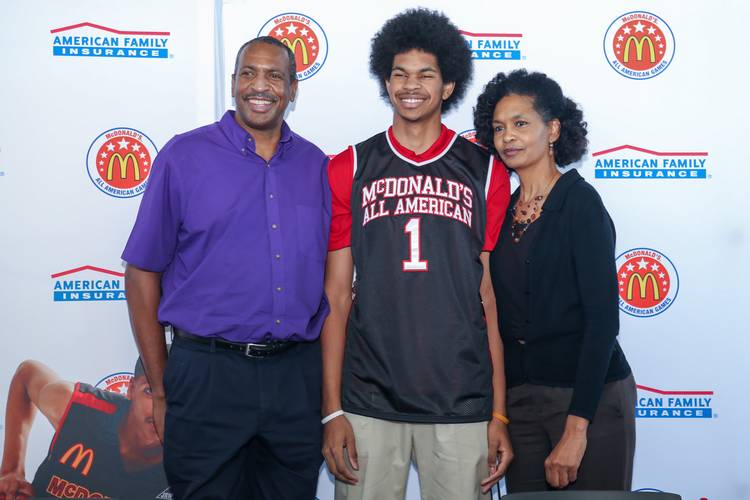 Jarrett Allen (center) celebrates with his father Leonard and mother Cheryl as he is named to the 2016 McDonalds All American Boys Basketball Team on February 10, 2016 at St. Stephen's Episcopal High School. PAUL BRICK FOR AUSTIN COMMUNITY NEWSPAPERS.

In today’s Golden’s Nuggets, Cedric touches on a couple Bevo-related items. Here’s what he had to say about them:

“Shaka Smart got his man. St. Stephen’s center Jarrett Allen made it official by signing with the Longhorns last week, and now Smart has a new building block in the paint after the departures of Cameron Ridley, Prince Ibeh and Connor Lammert.

The UT sports marketing folks have really made it fun at Club Erwin over the past couple of seasons, so I’m expecting to see plenty of oversized afros in the stands during Allen’s freshman season.”

On why Longhorn fans should pull for the Aggies this weekend in baseball:

“Texas baseball fans … this is that uneasy feeling you get when you are forced to pull for Texas A&M against TCU in the super regional because you don’t want Frogs coach Jim Schlossnagle advancing to a third straight College World Series, making it tougher for him to leave Fort Worth for Austin.”

“Texas Longhorns track legend Sanya Richards-Ross was hoping to end her stellar career at the 2016 Olympics, but those hopes took a hit Saturday when she injured her right leg during a 100-meter race in Atlanta. Richards-Ross crashed to the track midway through the race and was carried off in tears by her husband, Aaron Ross, a former NFL cornerback who helped the Texas football team to a national title in 2005.

While she’s the defending Olympic champion in the 400-meters, the 31-year-old Richards-Ross hasn’t shown her previous form lately, running a 52.16 recently at the Prefontaine Classic in Oregon, where she finished seventh. That time is well off what she would need to qualify for the USA Olympic team.”

For the rest of Cedric’s Nuggets, including his takes on Ken Starr’s and Art Briles’ recent public statements and the NBA Finals, click here.

Longhorns of all ages qualify for U.S. Open