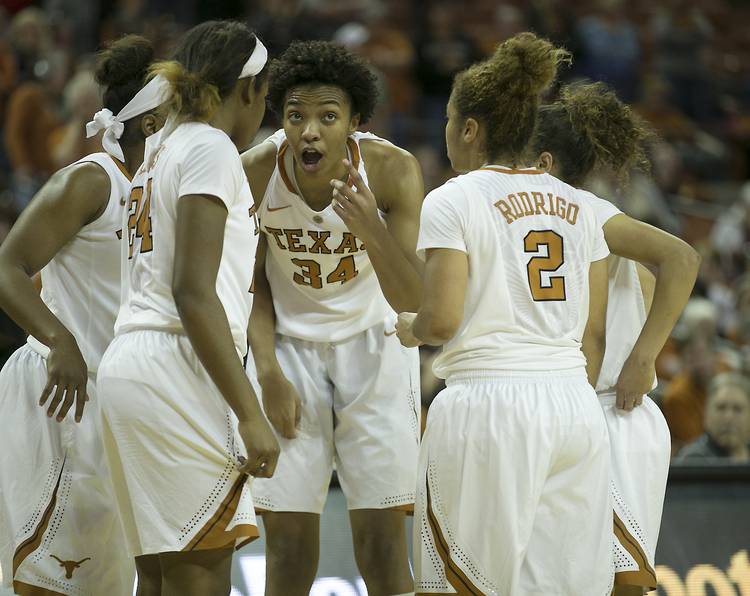 Texas' Imani Boyette gathers her teammates during the closing minutes of their close victory over OU 83-76.--The Texas Longhorns played host to the Oklahoma Sooners in a Big 12 game at the Erwin Center in Austin, TX Saturday January 23, 2016. RALPH BARRERA/ AMERICAN-STATESMAN

The recipients will be recognized during the 2016 N4A Convention Awards Luncheon on Saturday, June 11 at the Hilton Anatole in Dallas.

The award is intended to honor student-athletes who have overcome great personal, academic, and/or emotional odds to achieve academic success while participating in intercollegiate athletic

Boyette has an incredible story of achievement despite significant obstacles to find great success on the basketball court, in the classroom and within the community. As a survivor of multiple suicide attempts and molestation at a young age, Boyette has used poetry, basketball and her experiences at the University of Texas to overcome a turbulent youth.

She has been recognized with the Honda Inspiration Award and was named the 2014-15 Big 12 Conference Female Sportsperson of the Year. She was selected as a 2016 recipient of the prestigious Texas Exes President’s Leadership Award, which is presented to undergraduate students who have demonstrated outstanding leadership within the student community at the University of Texas.

Boyette became the first player in the history of the Texas women’s basketball program to reach the combined milestone of 1,000 career points, 1,000 career rebounds and 200 career blocks.