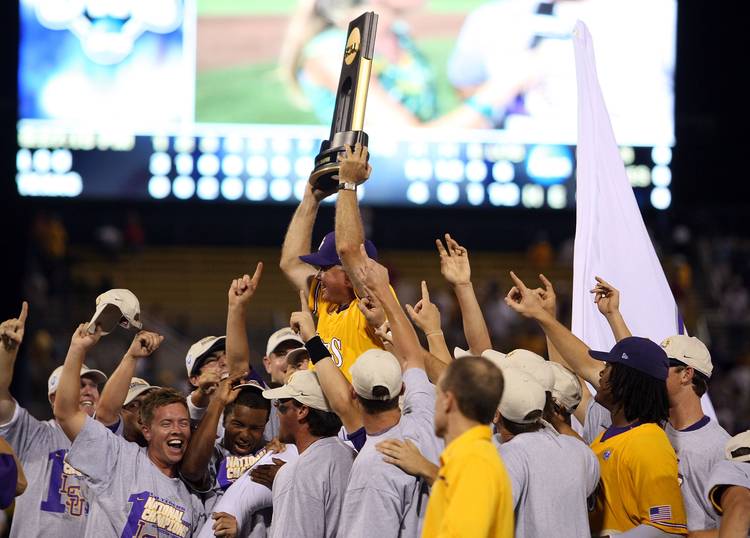 OMAHA, NE - JUNE 24: Head coach Paul Mainieri of the Louisiana State University Tigers is held up by his team after defeating the Texas Longhorns during Game 3 of the 2009 NCAA College World Series at Rosenblatt Stadium on June 24, 2009 in Omaha, Nebraska. The Tigers defeated the Longhorns 11-4 to win the national title. (Photo by Elsa/Getty Images)

Texas has broadened its search for a new baseball coach and has reached out to LSU’s highly successful Paul Mainieri, a source familiar with the search has told the American-Statesman.

It’s unknown if Mainieri would have much, if any, interest in becoming the Longhorns coach and replacing Augie Garrido, college baseball’s all-time winningest coach who was fired by Texas 17 days ago. But Texas has interviewed him for the position, according to the source.

Mainieri’s Tigers this week were bounced out of the super regional they hosted by Coastal Carolina, which swept LSU. However, he had to rebuild his entire team and replace eight starting players. Under Mainieri, LSU won 54 games and made it to Omaha last season and, since missing the NCAA Tournament in 2011, has posted a 249-78-1 record, been to the College World Series twice, two other super regionals and one other regional.

According to The Advocate (Baton Rouge), Mainieri said before the 2016 season he’d like to coach eight more years at LSU.  The Advocate notes that his base salary is $750,000 and his contract is valid through the 2020 season.

Another source told the Statesman that athletic director Mike Perrin has “been flying all over the country the last few days” trying to fill the position with an upper-tier coach. The source also said that Texas has used a search firm to assist Perrin.

Perrin has not responded to messages left for him.

The leading candidate still appears to be UCLA’s John Savage, who has not returned phone messages. Texas also put a full-court press on Vanderbilt’s Tim Corbin, but was rebuffed. Other coaches that Perrin has sought include Oregon State’s Pat Casey, Florida’s Kevin O’Sullivan, and Texas has kicked the tires on Louisville’s Dan McDonnell and Virginia’s Brian O’Connor.

McDonnell and TCU’s Jim Schlossnagle, whose Horned Frogs reached the College World Series for the third straight season this year, received big salary bumps in the $1 million range after their names were thrown out in the Texas search. Florida also has assured O’Sullivan he would be taken care of.

New Longhorn football jerseys have arrived — can you spot the difference?