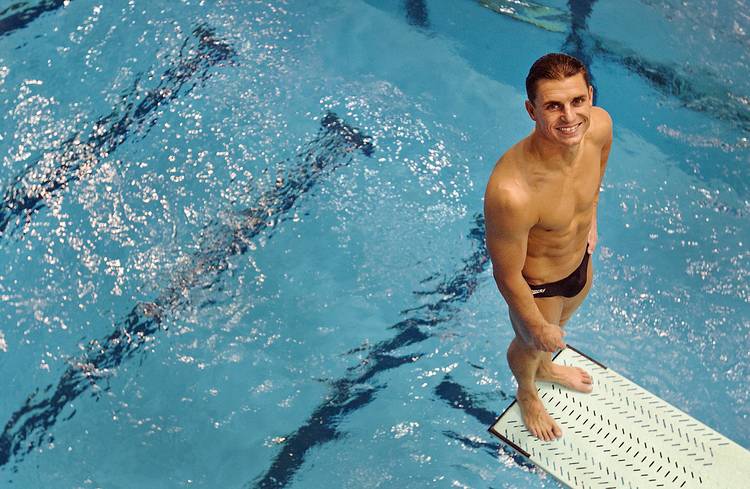 INDIANAPOLIS (AP) — Troy Dumais started diving with a dream of becoming the best in the world.

He’s leaving the sport still trying to prove it.

With a new wave of daring, young competitors eager to replace him on the international stage, a nerve injury that has been causing numbness in Dumais‘ right arm since early May and retirement plans already worked out, the 36-year-old diver insists he’s not ready to turn this week’s U.S. Olympic trials into a farewell tour.

“I am not done,” the former Texas standout said following Saturday’s underwhelming performance in the prelims and semifinals of his trademark event — synchro 3-meter. “I want to erase what happened and not let that happen again.”

Dorman and Hixon have only been working together two months, and while both have competed around the world, neither finished in the top 15 in their only other trials appearance four years ago.

Dumais and Ipsen, meanwhile, still know how to get the crowd revved and the judges’ attention.

If they can defy the odds and earn the lone spot on the U.S. team, Dumais would become the first American male diver to compete in five Olympics and the oldest to qualify for the team since at least 1912 — USA Diving does not have birth records of its teams from 1904 and 1908. He’ll get another chance Saturday in the individual 3-meter event, where he is fourth, 110.05 points out of the second qualifying spot.

Those who know Dumais best refuse to count him out.

“When you’re his age and can still compete at his level and physically are still there, it’s really all about the mental side of it,” Olympic gold medalist David Boudia said. “There’s no one better mentally than Troy Dumais.”

Only a few American divers have a resume even approaching the achievements of this steady Californian who owns 38 national championships and made 21 consecutive national teams after making his first appearance at age 16.

At Texas, he won four NCAA championships in 3-meter and three in 1-meter. He also competed in eight world championships and was named diver of the year three times and finally earned his first Olympic medal, a bronze, in 2012 with Ipsen.

Instead of retiring then as many expected, Dumais continued to dive by making more sacrifices to stay competitive.

“I’m 36 years old. All my friends are married and have kids now,” he said. “I haven’t even started that aspect because of my job, and I didn’t want to start it (a relationship) because I knew I wouldn’t be able to give it everything and it would be very sour.”

Now, it appears time may be catching up to diving’s iron man.

He said he often wakes up with his right arm in pain, completely numb. The result is that routine moments, such as walking down the board in unison, have become challenging.

“It happened and I have to deal with it,” he said, insisting he’d be 100 percent in Rio if he makes it. “I’m not blaming anybody, and I feel really bad for Kristian because we’ve worked so hard. I don’t want to let him down and I don’t want to let anybody in USA Diving down.”

Or his supportive family, who are often dressed in T-shirts touting Dumais‘ drive for five.

He plans to reward them by making a family visit the first stop after his career ends. Then he wants to do something “fun” before entering chiropractor school, building a relationship and starting the next chapter of life.

Dumais just isn’t ready to start over yet.

“I still want to be the best. Sometimes I falter and sometimes I’m in that vicinity,” he said. “I have (thought about not making the Olympic team) and I don’t like those feelings. But there are a lot of people who have had to close down a business or move on and that’s hard. The thing is I have another chapter that I get to start writing and it’s not diving. It’s a career, it’s a profession.”

UT’s Imani Boyette nominated for NCAA Woman of the Year

How many Longhorn greats can you fit into one picture?