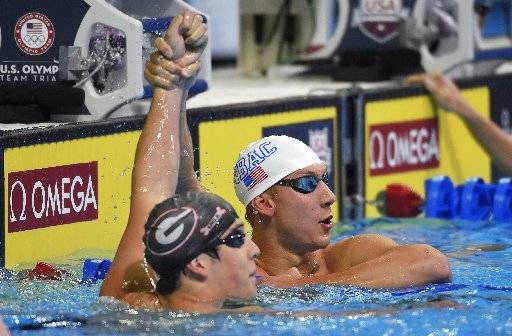 The first event of the U.S. Olympic swimming trials produced a stunner: Ryan Lochte failed to qualify for the team Sunday night in an event he won at the 2012 London Games.
Lochte, an 11-time Olympic medalist, raced out to a big lead on the first two legs of the 400-meter individual medley but had nothing left for the breaststroke and freestyle. He finished third behind Chase Kalisz and Jay Litherland, who were college teammates at Georgia.

After the race, Lochte revealed that he pulled a groin muscle during the morning preliminaries, saying it left him with no choice other than to try to build a commanding lead in the butterfly and backstroke and hope it would hold up.

“I had to go out faster than usual because I couldn’t use my legs in the breaststroke,” said the 31-year-old Lochte, who still has several other events to claim his spot on his fourth Olympic team — assuming he can overcome his injury. “I did everything I could in that race, it just wasn’t enough. Just got to forget about that and move forward.”

While college teammates Kalisz and Litherland celebrated, Lochte hung on a lane rope, totally exhausted. He finally made it over to the side of the pool, struggling just to climb out of the water. He said he might need a cortisone shot to help deal with the pain.
“I’m going to keep working on it day in and day out, and hopefully it gets better,” Lochte said. “I thought about it this morning, about scratching, but I mean, it’s the Olympic trials. If I had a broken leg, I’d still go out there and swim.”

Michael Phelps, who won the 400 IM at both the 2004 and 2008 Olympics, finished fourth behind Lochte in London and dropped the grueling event from his program. With no races on the first day of the meet, Phelps watched from the stands.
“I wasn’t surprised with Jay,” Phelps said. “He’s like a shark in the water. He knows how to rise to the occasion.”
Phelps was especially happy for long-time training partner Kalisz, who like Litherland is heading to his first Olympics.
“He’s like a brother to me,” Phelps said.

Unaware of Lochte’s injury, Phelps said he could tell that Lochte had nothing left when he got to the breast. And the two freestyle laps were downright painful to watch, as Lochte closed with a sluggish pace of 1:00.56 — more than 3 seconds slower than the 20-year-old Litherland.

“I know what Ryan felt like in that race,” Phelps said, remembering his loss at the 2012 Olympics. “I felt the same thing. It’s tough to swim two 400 IMs in one day at that level. … When you overdo it in that first 200, you’re not going to have anything left.”
Two other finals were held at the sold-out CenturyLink Center, which is hosting the Olympic trials for the third straight time in a temporary pool.

Maya DiRado qualified for her first OIympic team in the women’s 400 IM, knocking off 2012 silver medalist Elizabeth Beisel.
DiRado, who plans to retire after the Rio Games at age 23, is a late bloomer who peaked at just the right time. She touched in 4:33.73, finishing a couple of body lengths ahead of Beisel, who still earned a spot on her third Olympic team by holding off Bethany Galat.

“I’m happy with that,” Cox said.  “It’s all about going fast and getting into finals.  I feel prepared for Tuesday’s races and the rest of the meet.”

In the men’s 400 freestyle, Connor Jaeger and Conor Dwyer are heading back to the Olympics for the second time after finishing 1-2. Jaeger won in 3:43.79, while Dwyer took the runner-up spot in 3:44.66 — just 0.38 ahead of Texas sophomore Townley Haas, who placed third. Texas senior Clark Smith placed fifth at 3:45.74.

“My best time by far, and it was great to get out and race some of the best swimmers in the world,” Haas said.  “It was amazing, just a lot of fun to be out there.”