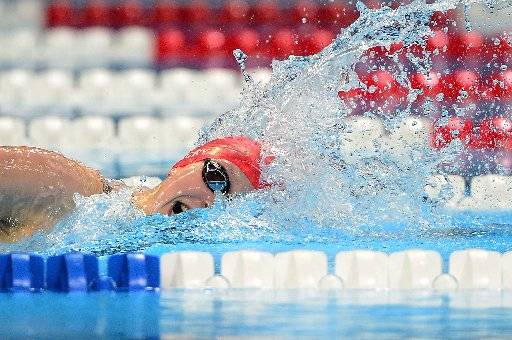 OMAHA, NE - JUNE 27: Katie Ledecky of the United States competes in the final heat of the Women's 400 Meter Freestyle during Day 2 of the 2016 U.S. Olympic Team Swimming Trials at CenturyLink Center on June 27, 2016 in Omaha, Nebraska. (Photo by Jeff Curry/Getty Images)

OMAHA, Neb. (AP) — Katie Ledecky has set the bar so high, it’s a bit of a disappointment when she doesn’t set a world record.

The 19-year-old has no complaints.  She’s heading back to the Olympics.

Getting that formality out of the way in her first event of the U.S. swimming trials, Ledecky held off a persistent challenge from Leah Smith to win the 400-meter freestyle on Monday night.

“The last 150, I just kept telling myself, ‘Rio! Rio! Rio!’” said Ledecky, who is also a big favorite in two other freestyle races to come. “I just tried to keep myself fired up and didn’t really care what the time was.”

Ledecky, who surprisingly won her first Olympic gold at age 15 four years ago in London, is now recognized as one of the most dominant freestylers in history. She set a blistering pace over the first half of the race, putting her more than 2 seconds ahead of the time from her record-setting performance at the 2014 Pan Pacific Championships in Australia.

But Ledecky tired a bit over the final 200, another world mark slipping away when she touched in 3 minutes, 58.98 seconds. Smith pushed the 19-year-old winner all the way, also claiming an Olympic berth by finishing at 4:00.65.

The crowd of more than 14,000 groaned a bit when they saw Ledecky’s time, but it was still the third-fastest in history.

“That’s fast,” Ledecky said. “That’s 3 seconds faster than anybody else in the world. I think we’re going to really represent the U.S. well in that event.”

Also Monday, Dana Vollmer locked up another trip to the Olympics less than 16 months after giving birth to her first child.

She finished second in the 100 butterfly behind Olympic rookie Kelsi Worrell, one of several young swimmers already signaling a changing of the guard in the first two days of the meet.

Smith will be heading to her first Olympics. Ditto for the top two in the 100 breaststroke, won by Kevin Cordes followed by Cody Miller.

That means seven Olympic first-timers have already made the powerful American team. Chase Kalisz, Jay Litherland and Maya DiRado qualified on the first night of the trials.

“Watching the other first-time Olympians, I feel like not a lot of people see the background,” Smith said. “Maya DiRado and Kevin Cordes have been good since 2013 and missed out earlier. I was nowhere near making the team in 2012, it’s been steady progress.”

In the 100 fly, defending Olympic champion Vollmer led at the turn, but the late-blooming Worrell rallied on the return lap to post the second-fastest time in the world this year at 56.48.

Vollmer touched next in 57.21, giving her the second Olympic spot. The 28-year-old Vollmer, a four-time gold medalist, was cheered on by her husband and their young son, Arlen.

“I had no idea how it would go when I started,” Vollmer said. “It’s really been an amazing life’s journey for me. To come in with no expectations and kind of improve all the time. I was a little disappointed when I touched with the time, but then you realize time doesn’t matter. I still got second place and I’m going to Rio.”

“I’m just so excited to be here,” Worrell said. “It is my first time, and I didn’t know what to expect.”

One night after stunningly missing out on an Olympic berth in the 400 individual medley, an ailing Ryan Lochte swam two more grueling races to qualify for the final of the 200 freestyle.

Shaking off the pain of a groin injury, Lochte got through the morning preliminaries and posted the fifth-fastest time in the evening semifinals.

But Lochte has his work cut out for him to earn an Olympic berth in Tuesday’s final, and he’s admittedly having trouble with his kicks and turns. He finished in 1:47.58 seconds, getting passed by both Conor Dwyer and UT’s Clark Smith on the final lap of their semifinal heat.

Dwyer, who already earned a spot on the Olympic team in the 400 free, was the top qualifier at 1:46.96. Smith took second in the heat at 1:47.49 and qualified fourth overall. UT’s Jack Conger won his semifinal heat and was second overall at 1:47.15. Texas sophomore Townley Haas placed second behind Conger at 1:47.18 and placed third in the semis. Longhorn Jonathan Roberts took the final qualifying spot and placed eighth.

There was nearly an even bigger shocker in the semifinals of the women’s 100 backstroke. Defending Olympic champion Missy Franklin, one of America’s biggest stars at the London Games four years ago, got off to an even slower start than usual and barely qualified for Tuesday’s final.

Franklin rallied just to finish fourth in her heat and wound up with the next-to-slowest qualifying time at 1:00.45 — a mere 0.04 from missing a spot in the final altogether. Thirty-three-year-old Natalie Coughlin, a 12-time Olympic medalist, also slipped into the final with last spot at 1:00.46. Olivia Smoliga was fastest at 59.16. Texas junior Tasija Karosas swam a personal-best time of 1:00.79 and finished in 11th place.