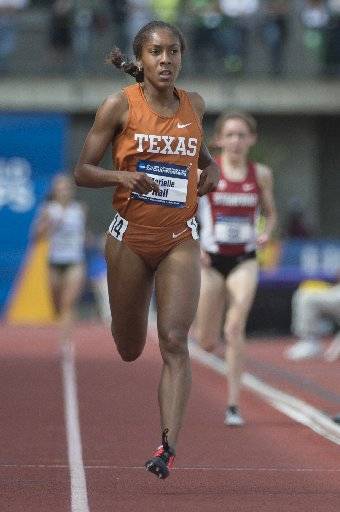 Texas Ex Marielle Hall earned a spot on the U.S. team and a number of former and current Longhorns qualified for event finals Saturday at the U.S. Olympic Trials in Eugene, Oregon.

Hall led the 10,000 meters race until Molly Huddle and Emily Infeld caught her with four laps to go. Huddle won by over four seconds, crossing the finish in 31:41.62. Infeld took second and Hall placed third at 31:54.77.

“It was a great day for the Horns getting another Olympic qualifier with Marielle Hall,” said Texas coach Mario Sategna.

Texas grad Courtney Okolo won her heat in the 400-meter semifinals and was right behind Francena McCorory and Allyson Felix to take third place overall in the semis. Okolo ran the 400 in 50.36 seconds to qualify for the final. McCorory had the top time at 50.28 and Felix was second at 50.31. UT’s Ashley Spencer advanced to the final with a seventh place finish at 51.21.

Texas sophomore Morolake Akinosun ran a personal-best time of 10.99 seconds in the 100-meters dash and advanced to the semifinals with a sixth place showing.

Former Texas and current Buffalo Bills wide receiver Marquise Goodwin nearly missed qualifying for the men’s long jump. He was as high as fifth place with his second jump of 25 feet 8 inches but slipped down to 11th place with three jumpers to go. One fouled, the other passed Goodwin’s mark and the final jumper came up short. Goodwin took the final qualifying spot at 12th place.

UT’s Aldrich Bailey fell short of advancing to the final of the 400 meter after placing ninth in the semis. Bailey was sixth in his heat at 45.42 seconds.

Former Longhorn and 2012 silver medalist Trey Hardee dropped to 17th place after the first five events of the decathlon on Saturday. Hardee dislocated his ankle in January and pulled a hamstring while training for the trials. He struggled on the high jump and pulled up lame on the final 120 meters of the 400.

He is attempting to make his third Olympic team and is planning on competing in the final five events on Sunday.

“This is my last Olympic Trials” Hardee said. “And I’m not gonna watch it from the stands.”