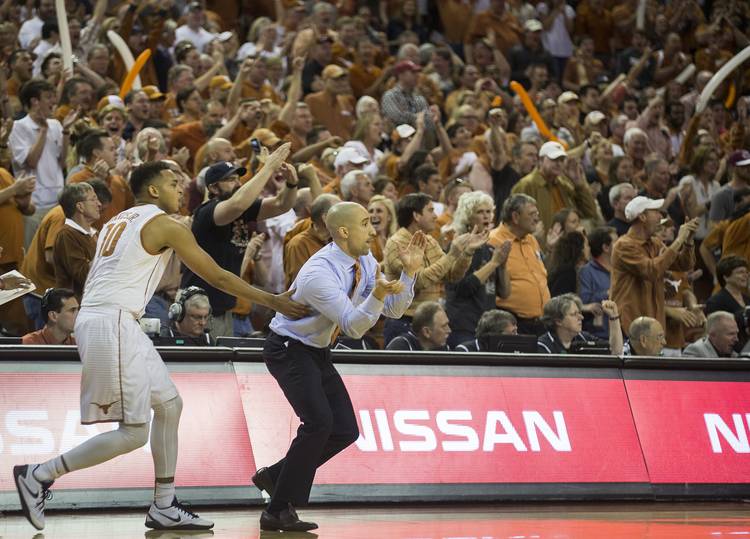 Texas freshman Eric Davis reaches out to grab coach Shaka Smart and pull his back to the sideline after a big moment against No. 3 Oklahoma on Feb. 27, 2016. RICARDO B. BRAZZIELL/AMERICAN-STATESMAN

No need for passports. The Texas men’s basketball team is staying in the contiguous 48 states for Shaka Smart’s second season with the Longhorns.

Texas officials unveiled the team’s 2016-17 non-conference schedule. The slate includes a trip to Brooklyn, N.Y., a unique trip to Michigan as part of a new home-and-home series with the Wolverines and then a late January game at Georgia as part of the Big 12/SEC Challenge.

Smart is currently in Chile working with the Team USA Under-18 team, which features UT freshmen Jarrett Allen and James Banks. But he was ecstatic about the schedule that would soon be released. “We play our first three games at home!,” Smart said earlier this month in Houston during U18 training camp.

The schedule, which starts with an exhibition game on Nov. 2, has plenty of recognizable opponents. The season begins Nov. 11 at home against Incarnate Word, then UT hosts Louisiana Monroe (Nov. 14) and Eastern Washington (Nov. 17). Those last two games are warm-ups in the Legends Classic tournament, which then moves to Barclays Center in Brooklyn.

Texas will face Northwestern on Nov. 21 and then play either Notre Dame or Colorado on Nov. 22 in either the championship or consolation game.

Texas will play UT-Arlington (Nov. 29) and then Alabama (Dec. 2) before heading off to Ann Arbor, Mich., for a date with Michigan (Dec. 6). That game is the first of a two-game contract. The Wolverines are scheduled to play in Austin during the 2017-18 season.

UT hosts Long Beach State on Dec. 10 and then heads down to Houston for an old Southwest Conference matchup against Arkansas on Dec. 17. The two teams have not met since January 2011.

Texas closes out the early portion of the non-conference slate against UAB (Dec. 21) and Kent State (Dec. 27).

Conference play usually begins in early January, but UT will also travel to face Georgia on Jan. 28. The Horns and Bulldogs have not met on the basketball court since the 2002-03 season opener in the AT&T Wireless Classic in New York.