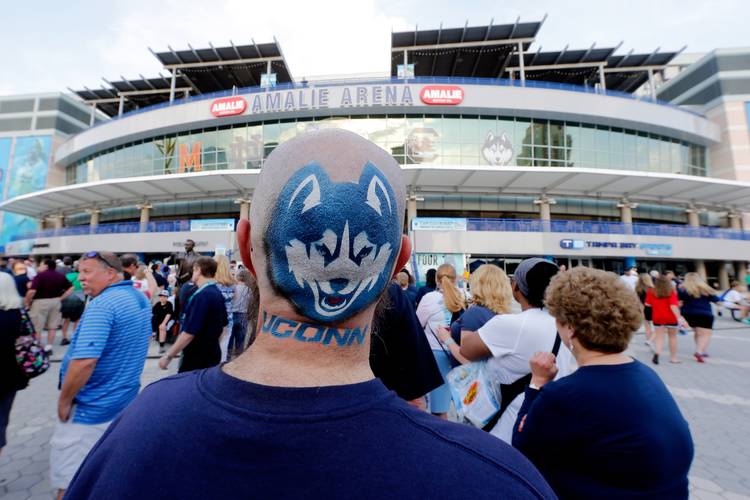 Fans enter the arena prior to the NCAA Women's Final Four National Championship between the Notre Dame Fighting Irish and the Connecticut Huskies at Amalie Arena on April 7, 2015 in Tampa, Florida. (Photo by Mike Carlson/Getty Images)

According to a report by the Wall Street Journal, if the Big 12 officials want to use “worth” when it comes to selecting new members, Houston wouldn’t be close to making the cut.

By combining two reports released by the Journal over the past year, Connecticut and South Florida are the clear cut leaders in “worth” when fans combine the Journal’s report on values of men’s basketball programs and football programs. UConn’s hoops team is assigned a value of $137.9 million, and its football program is given a $88.12 million tag. Combined, that $226 million is tops of 11 schools that have been bandied about for Big 12 expansion. That appraisal is higher than three current members – TCU, Baylor and West Virginia.

Rounding out the other top four candidates on the Journal’s list are USF at $159 million, BYU at $128 million and Central Florida at $117 million. The University of Houston ranks 10th of the 11 candidates with a total value of $50 million. East Carolina is last with a tag of $36 million.

Total combined values in FB/MBB of B12 members & expansion candidates according to @WSJ. Results are interesting… pic.twitter.com/IrzDP1MdGJ

Of the current Big 12 schools, the University of Texas leads the way with a market price of $962 million. Oklahoma’s programs total $726 million. The Horns’ hoops program add $77.1 million, while Kansas’ cagers are worth $258.2 million per the report. That value alone vaults the Jayhawks to third place in the conference.

RELATED COVERAGE: Where does Texas athletics rank nationally in ‘worth’?

According to the Journal: “(Ryan) Brewer analyzed each program’s revenues and expenses and made cash-flow adjustments, risk assessments and growth projections to calculate what a college team would be worth on the open market, if it could be bought and sold like a professional franchise.”

Brewer is an assistant professor of finance at Indiana University-Purdue University Columbus.