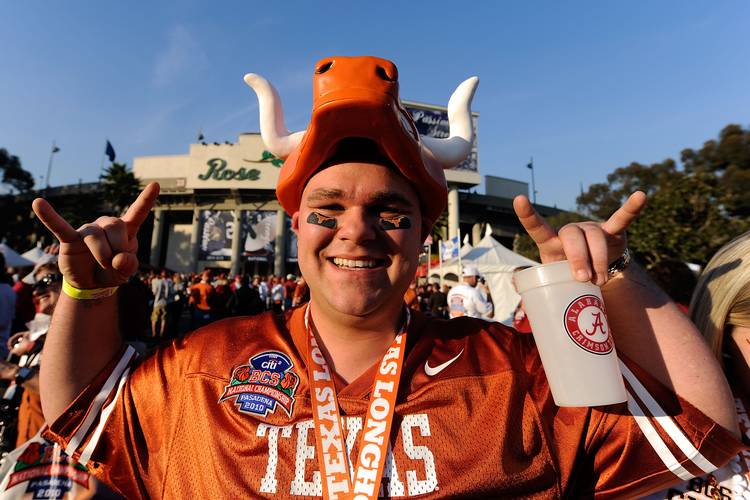 A fan of the Texas Longhorns stands outside the stadium prior to the game against the Alabama Crimson Tide in the Citi BCS National Championship game at the Rose Bowl on January 7, 2010 in Pasadena, California. (Photo by Kevork Djansezian/Getty Images)

On Monday, we presented the “worth” of 11 schools that are being considered for Big 12 expansion with Connecticut and South Florida at the top.

According to WSJ.com, Texas tops the list of current Big 12 members at $962 million when fans combine the Wall Street Journal’s report on values of men’s basketball programs and football programs. That leads second-place Oklahoma by a whopping $236 million. But where do the Longhorns sit nationally?

Texas’ football program comes in with the second-highest price tag in football at $885 million. Ohio State outpaces the Longhorns at $946.6 million. Combined with basketball that $962 million total falls short of Ohio State’s $1.187 billion with $240.4 million coming from hoops.

Here are the top 10 schools worth-wise via WSJ.com

Top 10 schools ranked by 'worth'

When combining men's hoops and football, these schools top the national list

According to the Journal: “(Ryan) Brewer analyzed each program’s revenues and expenses and made cash-flow adjustments, risk assessments and growth projections to calculate what a college team would be worth on the open market, if it could be bought and sold like a professional franchise.”

Brewer is an assistant professor of finance at Indiana University-Purdue University Columbus.

In the Big 12, Kansas hoops’ program pushes the athletics program into the top 3 with the conference.

Big 12 schools ranked by 'worth'

When combining men's hoops and football, the rank of the 10 schools in the conference.

Where can I track all the Longhorn Olympians? Texas has you covered