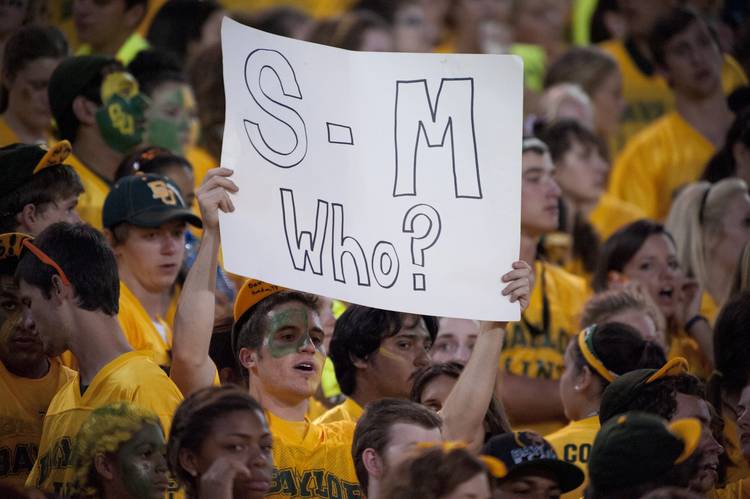 A Baylor University fan holds up a sign "S-M Who?" as the Bears played the SMU Mustangs on September 2, 2012 at Floyd Casey Stadium in Waco, Texas. (Photo by Cooper Neill/Getty Images)

So, Big 12 officials voted on the exploration of adding new universities to its membership last week.

Our staff tackled some issues late last week and early this week: UConn, USF lead; Houston at bottom in athletics ‘worth’ per report, BYU vs. Houston — a Cougars’ tail of the tape and perhaps there’s a deal in place for the University of Houston and University of Texas to scratch each other’s backs.

But, just what is the rest of the country saying about the conference’s potential growth this week?

Here’s a round up of some of the stories and columns:

A columnist pushes for Central Florida and South Florida to work together to join the Big 12. (Tampa Bay Times)

How Big 12 expansion could have a domino effect to help or hurt smaller schools. (Virginian-Pilot)

SMU is pouring in $150 million into its facilities. But is it to impress Big 12 officials? (FoxSports.com)

How Boise State makes sense for the Big 12. (Idaho Statesman)

Running back Roderick Bernard likely out for 2016