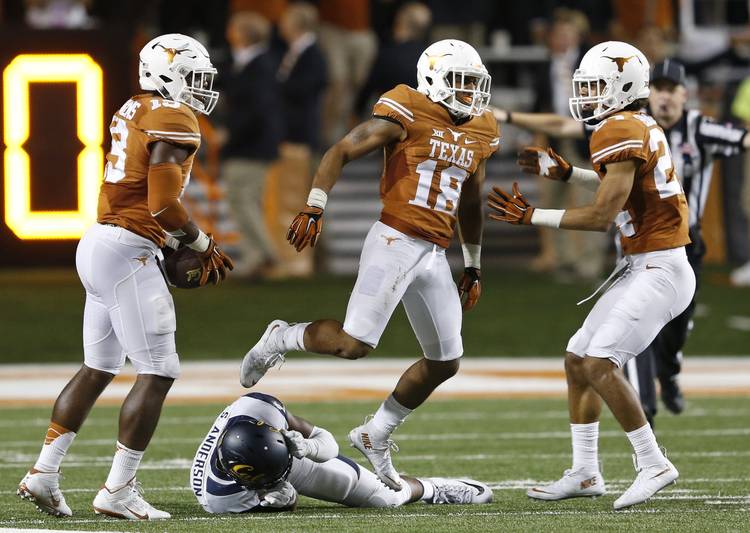 I don’t know if Texas safety Kevin Vaccaro is going to play a little or a lot this season, but the Brownwood senior has a lot of qualities that his head coach is looking for.

We asked Vaccaro on Wednesday night what the defense’s mission is this upcoming season, and Vaccaro told us, “Our mission is to be headhunters and knock everybody down.”

That’s got to be music to defensive coordinator Vance Bedford’s ears. After a season of horrendous defense and some of the worst tackling ever seen at Royal-Memorial Stadium, Bedford and new secondary coach Clay Jennings are cracking the whip on that side of the ball and demanding improvement. As defensive end Naashon Hughes said, “We all know how we played on defense last year. There’s no need to go into detail on that.”

He’s right. It was bad. Bedford called it “terrible.”

Vaccaro has always been a physical player who loves delivering hard hits, not unlike his more famous brother, Kenny, with the New Orleans Saints. Kevin’s part of a talent-rich secondary that has depth and athletic ability and should be a Longhorns strength this season.

He said he hasn’t taken a shot at quarterback-turned-wide receiver Jerrod Heard in practice yet, but kidded, “Not yet, but it’s coming.”

So may be the defense, provided Brick Haley finds a pass rusher or two up front and develops a strong combination in the middle with tackles like Paul Boyette, Chris Nelson, Poona Ford and six freshmen itching for playing time.

Episode 21 of On Second Thought: Will Jerrod Heard work at wide receiver?

Longhorns in the Olympics: Day 6