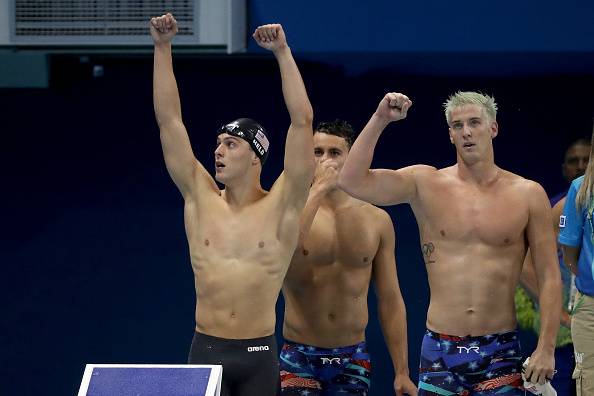 Two swimmers with University of Texas ties — current Longhorn Jack Conger and Texas-ex Jimmy Feigen — were among a group of four U.S. Olympic swimmers who were robbed at gunpoint late Saturday by individuals posing as police.

The U.S. Olympic Committee confirmed that Conger and Feigen were with fellow American swimmers Ryan Lochte and Gunnar Bentz.

“Their taxi was stopped by individuals posing as armed police officers who demanded the athletes’ money and other personal belongings,” a spokesman for the United States Olympic Committee told the media.  “All four athletes are safe and cooperating with authorities.”

According to reports, the four were leaving a party in the French hospitality area. The final session of swimming concluded Saturday night.

Conger’s mother told the Washington Post: “All I know is Jack is safe and in Rio.” Conger, who will be a senior at Texas this fall, won a gold medal as a part of the 4X200-meter freestyle relay. He’s an 11-time All-American at Texas.  Feigen is a UT graduate who was a 17-time All-American with the Longhorns from 2009-12.

After Michael Phelps, Lochte is the most recognizable names on the men’s Olympic swim team.

“And then the guy pulled out his gun, he cocked it, put it to my forehead and he said, “Get down,” and I put my hands up, I was like ‘whatever.’ He took our money, he took my wallet — he left my cell phone, he left my credentials.”

Longhorns in the Olympics: Day 8