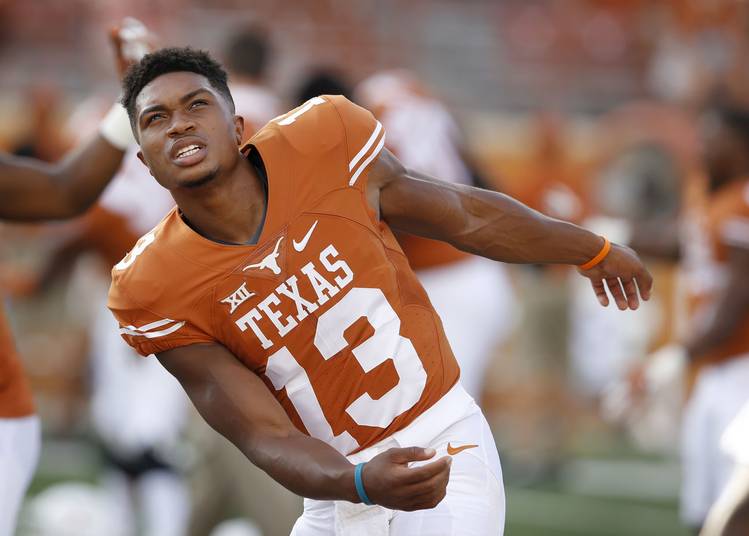 Charlie Strong says Heard asked to switch positions when it became apparent he was running behind senior Tyrone Swoopes and freshman Shane Buechele in the battle for starting quarterback.

Good for Heard, who could have just thrown his hands up and announced his intention to transfer. Instead, he’s decided to stick around and fight for playing time at another position. Heard’s type of athleticism will benefit this offense if he can catch the football and bounce back from taking big hits.

“A lot of players, if you ask them to change they’ll do it now, whereas it used to be where they would sit back and say, ‘No, I’m a quarterback and that’s all I am,’” Strong said. “But (Heard) knows that he can help this football team.”

Strong has to be happy about Heard wanting to play receiver; Texas is going to need more than a couple of playmakers at the position if Sterlin Gilbert’s offense is to sing this fall. Truth be told, none of us know for sure whether Heard can make that successful transition, but wanting to contribute wherever possible speaks highly of a guy who grew up playing the most high-profile position on the field.

It may sound like a broken record, but I keep going back to the night Heard posted a record 527 total yards in last year’s loss to California. Gilbert, who hasn’t seen tape from that game if he hasn’t deviated from his philosophy of watching past game films, has to figure out a way to get that explosiveness out of Heard at wideout.

While the move is now official, Strong added Heard still takes some reps at quarterback, so don’t be shocked to see him in a change-of-pace role at times. It would be crazy to not have a package installed for him at QB.

This team will need Heard. You can never have enough gamebreakers, and Heard in the open field is just that — a certified gamebreaker.

Here are some more more nuggets — on where Michael Phelps ranks on list of our greatest all-time athletes, and the defensive shortcomings of Team USA.