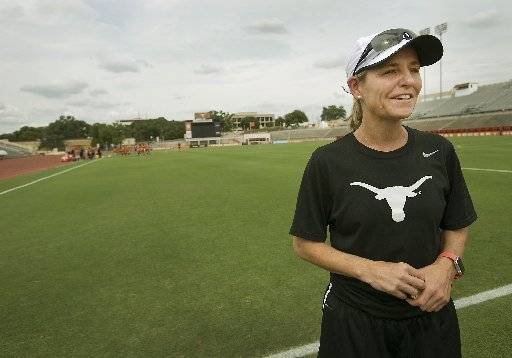 Texas coach Angela Kelly earned her 200th career win with a 3-1 victory over College of Charleston Friday night at Mike A. Myers Stadium.

Texas junior Olivia Brook and senior forward Jasmine Hart scored in a four minute span midway through the first half and Alexa Adams’ goal in the 58th minute gave Texas a two-goal cushion.

Kelly reflected on her time at Texas and guiding the Tennessee Volunteers.

“I’ve been coaching now for 17 years, so there are a ton of players at two programs that gave blood, sweat and tears for that. So, I’m really appreciative of them, and the opportunity that the University of Tennessee, Joan Cronan and the legendary Pat Summitt gave me just for taking a first chance on me at a very young age. I’m very grateful for that as well as for the tremendous opportunity that the University of Texas has provided me since 2012 as head coach of the Longhorns.”

Hart found Brook on the left side of the box in the 22nd minute and Brook slipped a shot into far corner of the net. Hart received a long pass from Monique Iannella in the 26th minute and hit a shot from 12 yards out past Lauren Killian.

The Cougars (0-3-0) cut the lead to one in the 33rd minute when a Texas defender headed a ball that dropped in front of Ali Freitas and Freitas drove the ball in from 19 yards out.

Adams gave the Longhorns a two-goal edge in the 58th minute when she broke through the middle of the pitch and sent a right-footed shot from inside the box past Killian.