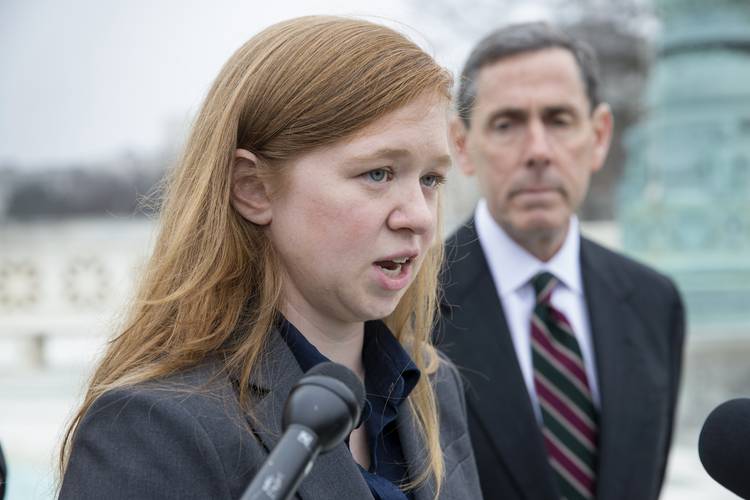 Abigail Fisher, who challenged the use of race in college admissions, joined by lawyer Edward Blum, right, speaks to reporters outside the Supreme Court in Washington, Wednesday, Dec. 9, 2015, following oral arguments in the Supreme Court in a case that could cut back on or even eliminate affirmative action in higher education. (AP Photo/J. Scott Applewhite)

We all know the Longhorns tend to draw some rather notable spectators to Darrell K Royal-Texas Memorial Stadium. The Notre Dame game alone attracted the likes of Gov. Greg Abbott, Matthew McConaughey and Bevo XV. And maybe Abigail Fisher?

It’s unclear who took the picture of a woman who looks like Fisher, but it’s been circulating social media the last two days. Fisher is best known as the plaintiff in landmark court case Fisher v. University of Texas at Austin, which concerned the school’s race-conscious admissions program. The 8-year-long legal dispute began after UT denied Fisher admission to the flagship campus in 2008. She instead attended Louisiana State University. The U.S. Supreme Court upheld UT’s policy in June.

Let’s be clear: There’s no confirmation that the woman in the photo is actually Fisher, that it was taken at the Notre Dame game or that it was even taken at DKR. But that hasn’t stopped people on social media from taking the idea and running with it.

The "Abigail Fisher" sighting is kinda scary yo. Like "Loch Ness" scary. pic.twitter.com/FwTzOP6mSY

Abigail Fisher has the "I can't wait to sue you" face down pat.https://t.co/ZpbmdAcUnu

abigail fisher going to a UT game is unprecedented levels of boldness pic.twitter.com/iEaiqaGpBR

The photo shared by @PercivalPenman seems to have been the original tweet. However, he replied to one follower that the photo was perhaps taken Tuesday, not Sunday, so this might all be a case of telephone-by-Twitter.