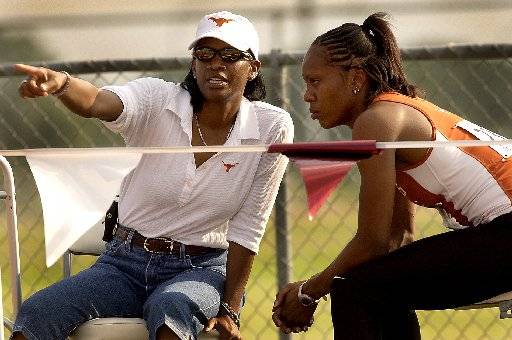 AUSTIN, Texas (AP) — The University of Texas recently asked the state Supreme Court to block a sex and race discrimination lawsuit filed by former women’s track coach Bev Kearney, who was forced out in 2013 after the school learned about a romantic relationship with one of her athletes a decade earlier.

University lawyers argued in an Aug. 26 filing that Kearney hasn’t shown she was treated differently than someone in a similar position, and that allowing the case to continue would rewrite the standards for when state agencies could be sued. Two lower courts have allowed Kearney‘s case to proceed.

Kearney sued in 2014, arguing that as a black woman, she was held to a tougher standard than a white male coach or other school officials who she alleges were in relationships with subordinates.

Shortly after she resigned under pressure of being fired, Texas revealed that former assistant football coach Major Applewhite was reprimanded, but not fired, for a relationship with a female student trainer on a 2009 bowl trip. Applewhite was later promoted and given pay raises. He stayed on the Texas staff until head coach Mack Brown was forced out after the 2013 season. Applewhite is now the offensive coordinator at the University of Houston.

The state Supreme Court has not yet decided whether it will consider the university’s appeal.

The case has “potentially exposed UT to years of defensive litigation in a case where the pleadings have failed the most minimal tests imposed by law,” university lawyers wrote in their appeal. “If Kearney was in fact the victim of the discrimination she claims, it would not be difficult for her to identify similarly situated employees treated differently from her.”

University lawyers argued Kearney hasn’t shown how any of the alleged relationships raises in her lawsuit were “comparable in seriousness to Kearney‘s conduct.”

Texas officials insist Kearney “crossed the line” of behavior for a coach and that it acted appropriately in forcing her out.

All evidence-gathering and witness interviews have been on hold since Texas pushed the case into the appeals courts in 2014.

Applewhite is the only witness deposed so far. His interview and documents previously released to Kearney‘s lawyers were sealed by a court order, requested by the university on the grounds that it was needed to protect private student information.