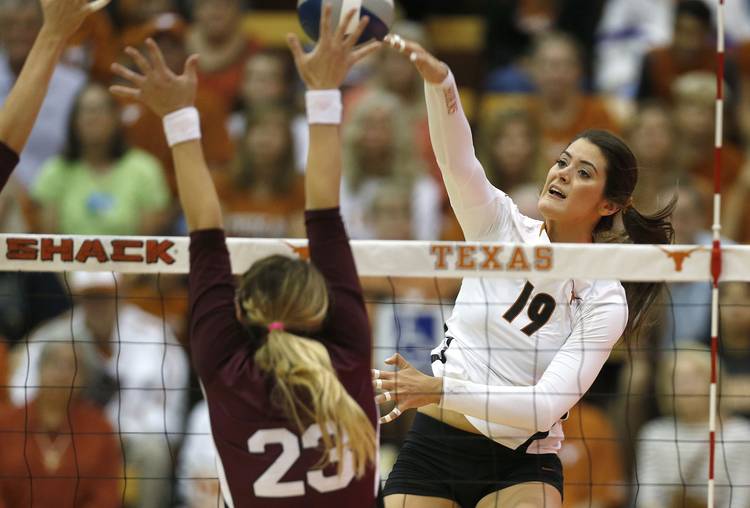 White had five kills in the deciding fifth set and Prieto Cerame hit the game winner to keep Texas (12-2, 4-0) undefeated in conference play.

Prieto Cerame had a season high kill total, hit .500 for the match with only two errors, and has posted double-digit kills in seven-straight matches.

Texas junior Ebony Nwanebu added 17 kills while hitting a .273 clip and had nine digs with three blocks. White helped out on defense with a team-high 16 digs and hit .213. The Longhorns are 10-0 this season when White, Nwanebu and Prieto Cerame post double-digit kills and hit .200 or better.

Kylee Zumach led the Wildcats with 18 kills and Brooke Sassin had 17 kills with nine digs. Kansas State senior Katie Reininger hit .464 with 16 kills as the Wildcats (12-4) dropped to 1-2 in the conference.

Kansas State fought off three set points in the first set, but a kill by Nwanebu gave Texas the opening set 25-22.

The Wildcats opened the second set on a 7-3 run and held the lead until a block by White and Morgan Johnson tied it at 18-18. Johnson had a team-high six blocks. White slapped down a kill to give Texas a chance at match point at 25-24, but a kill by Sassin, an attack error by Nwanebu and an ace by Macy Flowers evened the match at a set apiece.

The Longhorns built a 5-1 lead in the third set and pushed the lead to nine late in the set.

Kansas State broke a 16-16 tie in the fourth set with three straight points and kill by Zumach at 24-18 pushed the match to a fifth set.

Texas got out of an early hole in the fifth set with a pair of kills by White and the Longhorns took their first lead at 7-6 after a block by Nwanebu and Orie Agbaji. Nwanebu put Texas ahead by three at 12-9 with a kill and hit down another kill to set up match point.

Texas vs. Oklahoma State: Horns up, Horns down, and our plays of the game