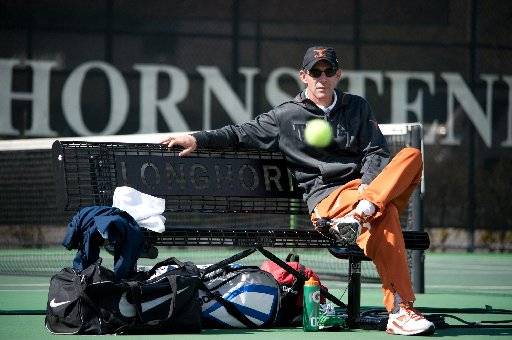 The Texas men’s tennis team won five singles matches and two doubles matches in the qualifying round of the ITA All-American Championships on Monday in Tulsa, Oklahoma.

The Longhorns won five of six singles matches and each player can advance to the main singles draw with a pair of wins in the second round of qualifying on Tuesday.

“It was exciting to see us play as well as we did,” said Texas head coach Michael Center. “To win seven of your eight matches at this tournament is a heck of a day. I’m proud of the effort, but we have another big day tomorrow with some great challenges ahead.”

Texas freshman Christian Sigsgaard won four matches in the pre-qualifying round and moved on to the second round of qualifying with a 6-4, 7-5 win against Georgia’s Emil Reinberg. Sigsgaard will face Memphis’ Andrew Watson. Fellow freshman Yuya Ito notched a three-set victory over Washington’s Gal Hakak 4-6, 7-5, 6-4 and will play Duke’s Catalin Mateas in the second round.

Ito and Scott won two doubles matches and have a chance to advance to the main doubles draw with a victory on Tuesday. They edged Georgia’s Reinberg and Nathan Ponwith 6-4, 2-6, 1-0 (10-8) then eliminated North Carolina’s Robert Kelly and Joshua Peck, 7-6 (5), 7-5 in the round of 32.

Golden: What took Charlie Strong so long to take over the defense?