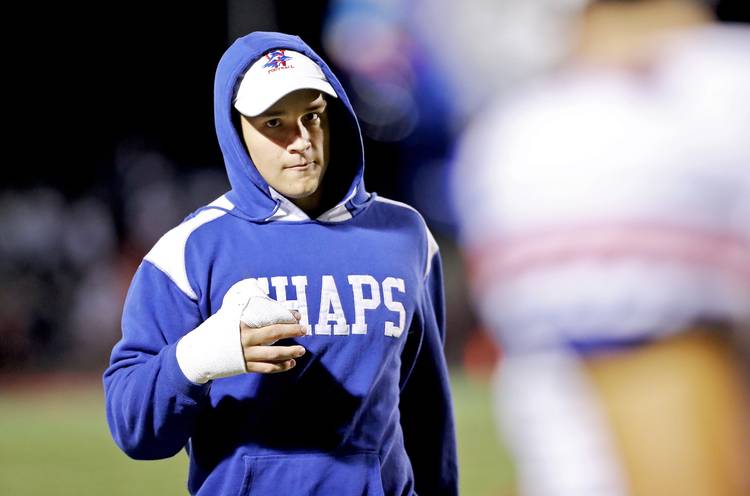 Westlake Senior Quarterback, Sam Ehlinger, takes his pads off for the second half after injuring his thumb during the first quarter against Lake Travis High School and is out for the remainder of the game on Friday, October 7, 2016. (Elizabeth Kreutz for American-Statesman)

Westlake quarterback Sam Ehlinger’s season might be over, but his football career has a few more chapters looming.

Ehlinger, who will have surgery on Tuesday to repair a broken right thumb, aspires to make a difference when he signs with the University of Texas in February.

“I would like to be on the team that bring Texas back,” Ehlinger said Monday. “Back to being a top 5 team again.”

Ehlinger’s season season with the Chaparrals has been shattered by injuries. He had surgery on his left knee on Aug. 30. His fractured thumb — called a Bennett fracture — will take a minimum six weeks to heal.

The Class 6A offensive player of the year in 2015, Ehlinger is among the most coveted high school quarterbacks in the country. After he suffered his latest injury during Friday’s 49-7 loss to Lake Travis, he received phone calls from Texas head coach Charlie Strong and offensive coordinator Sterlin Gilbert.

“They basically just said to stay strong and keep my head up,” Ehlinger said. “They’re just as disappointed about me missing my senior season as I am.”

Ehlinger will enroll at Texas in January, which will give him a chance to compete for the quarterback position during spring practice. He said he is friends with current Horns quarterback Shane Buechele.

Ehlinger said he does not know what his role will be during his first season with the Longhorns.