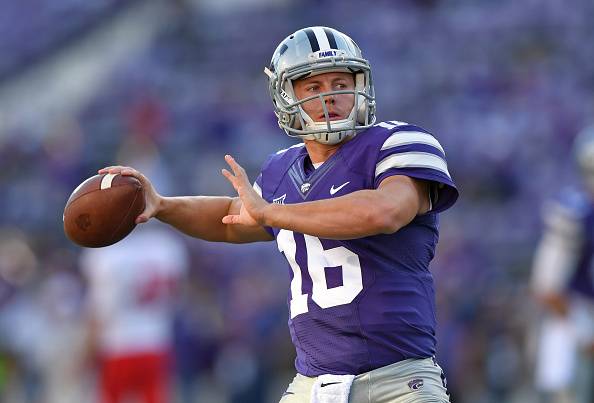 MANHATTAN, KS - OCTOBER 08: Quarterback Jesse Ertz #16 of the Kansas State Wildcats warms up, prior to the game against the Texas Tech Red Raiders on October 8, 2016 at Bill Snyder Family Stadium in Manhattan, Kansas. (Photo by Peter G. Aiken/Getty Images)

Ertz injured his shoulder last Saturday in a loss to Oklahoma. K-State then turned to Joe Hubener, the former receiver who played most of last season after the Wildcats lost their top two quarterbacks.

It doesn’t matter which quarterback will play. The Wildcats run Snyder’s system, which features solid running to set up play action. There will be some called quarterback runs.

Ertz was lost for the year with a knee injury on the opening series of last season.

He hasn’t played very well this year.  Ertz ranks 10th in the Big 12 in passing and pass efficiency.

Marvin Wilson, top recruit in Texas, saw the love from Texas fans during his visit