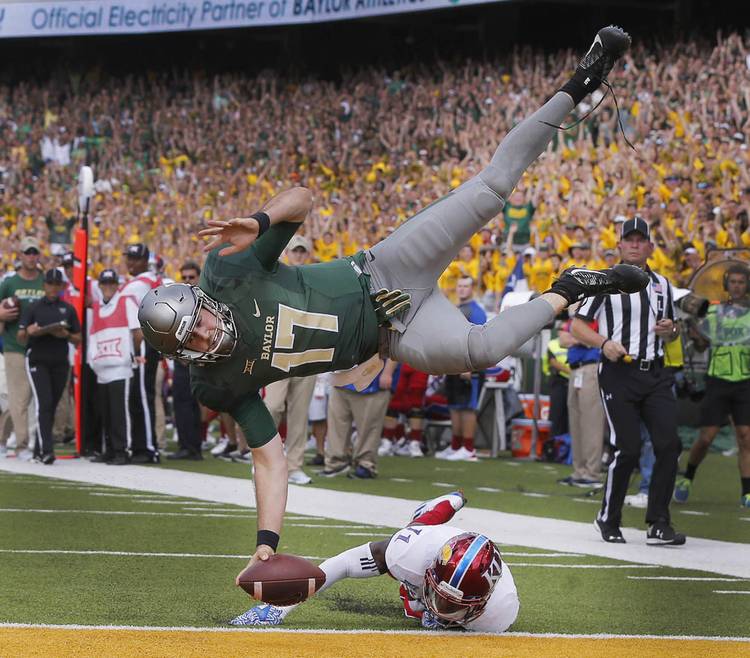 WACO – – The Texas defense is just below middle-of-the-road in the Big 12. But that’s not much to brag about since teams in the league outside of West Virginia and Baylor have been abused by opposing offenses.

Still, Baylor quarterback Seth Russell was complimentary of the Longhorn defense Monday as he discussed Saturday’s game between the Bears and the Longhorns.

“They’re really talented,” Russell said of the Longhorns defense that is allowing 438.7 yards per game. “They have a lot of really good athletes on the defensive side of the ball.

“The coaches have done a great job of adjusting, mid game. I feel like they really have a lot of heart. It shows on the field, it shows in the film, the way they’re able to execute at a high level … they’re not ever going to quit, that’s just who they are. We’ve got to do what we do and be who we are.”

Who is Baylor, offensively? The Bears are mostly the same as in past years, which means they beat teams with a dynamic balance of rushing and passing. Baylor is third in the league behind Texas Tech and Oklahoma in total offense. But the Bears are best at running the ball, averaging 282.8 ground yards a game.

The Longhorns beat the Bears a year ago in Waco, 23-17. But Baylor was down to its fourth-string quarterback when it took on Texas. Russell has never started a game against the Longhorns.