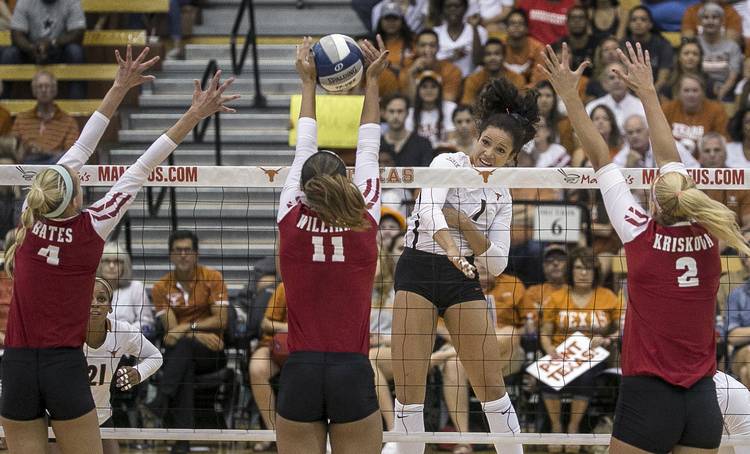 The victory moved Kansas (20-2, 9-1) into a tie for first place with the Longhorns in the conference standings and was the program’s first win over Texas since 2003. The Jayhawks have won eight straight conference matches since losing to the Longhorns 3-1 at Gregory Gym in late September.

Texas freshman Micaya White led Texas (17-3, 9-1) with 25 kills and had just six errors on 54 attacks while hitting .352. Ebony Nwanebu had 15 kills for the Longhorns and Texas senior Paulina Prieto Cerame chipped in 13 kills. Texas senior Chloe Collins notched her eighth double-double of the season with 43 assists and 20 digs.

Kansas carried the momentum into the third set, building a 16-12 lead that forced a Texas timeout. The Longhorns rallied to tie it at 19-19 and took a two-point lead at 21-19. Texas had two chances to win the set but failed to convert the game winner. Tied at 25-25, back-to-back attack errors by White and Nwanebu gave the set to the Jayhawks 27-25.

Texas won five straight points to open the fourth set and built a 13 point lead. White had six kills as Texas pushed the match to a fifth set with a 25-12 victory.

The Jayhawks went ahead 5-2 early in the fifth set and stretched the lead to 12-7. Texas managed to get within three at 13-10, but a kill by Kayla Cheadle and a attack error by White gave Kansas the set and match.