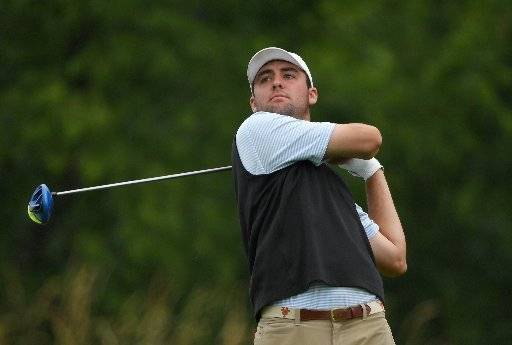 Amatuer Scottie Scheffler of the United States plays his shot from the fourth tee during the first round of the U.S. Open at Oakmont Country Club on June 16, 2016 in Oakmont, Pennsylvania. (Photo by Ross Kinnaird/Getty Images)

Texas junior Scottie Scheffler shot a 66 to claim the individual title and help the Longhorns land the second seed in the match play round at the East Lake Cup Monday in Atlanta.

Scheffler birdied three of the last four holes on the front nine and took the lead when he rolled in a birdie on the par-4 10th. He added birdies on 12 and 14 before dropping a stroke with a bogey on the par-4 16th. He closed with a birdie to earn his third career title. His 66 was his first sub-70 round of the season.

Nick Hardy of Illinois and Vanderbilt’s Will Gordon tied for second place at 4 under. Texas’ Doug Ghim finished in fourth place after carding a 3-under 69. He led the field with 13 pars, had four birdies and one bogey. The Longhorns shot a 1-under 287 and will play three seed Illinois in the match play round. Texas sophomore Steven Chervony finished with a 75 and Taylor Funk shot a 77.

Vanderbilt took the top seed by finishing with a 6-under 282. Defending national champion Oregon took the fourth spot and will face the Commodores. The match play semifinals will air on the Golf Channel on Tuesday starting at 2 p.m.

Here’s a look at the match play pairings: