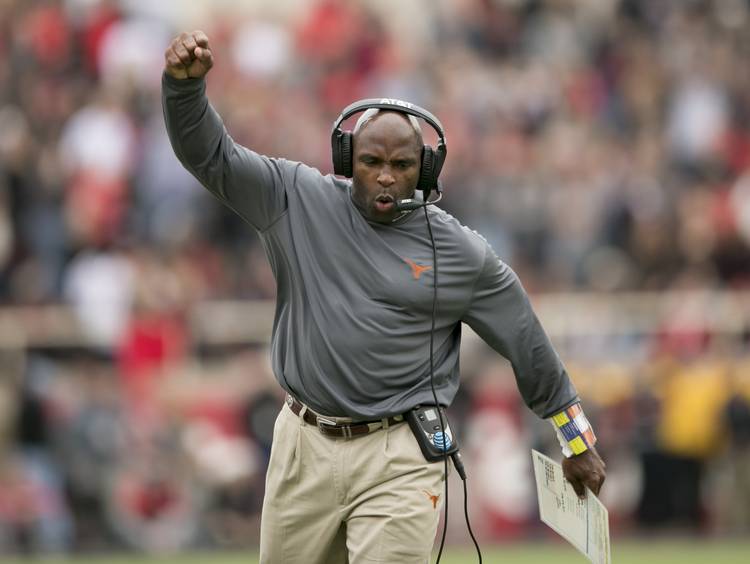 Would an 8-4 record give Charlie Strong a pay raise?

This is how fluid Charlie Strong’s situation at Texas is. With a road victory over Texas Tech, the Longhorns have won three of their last four games and could take an 8-4 record into a bowl game. Their resurgence raises the possibility of an extension for Strong if he returns for a fourth season in his five-year contract. Texas could consider bumping Strong’s salary from $5.2 million this year to, say, $6 million for the 2020 season without any more guaranteed money beyond the next two. “A raise for 7-5?” said one high-powered official. “Not sure more money happens.” But if Strong is around for 2020, that would mean he has turned the corner and would be worth every penny and more.

If Texas’ D’Onta Foreman isn’t an All-American at running back, I’ve never seen one. I’m on the Football Writers Association of America All-America selection committee and consider him and Florida State’s Dalvin Cook the country’s two best backs. Did you know that on 206 carries this season, Foreman has lost yardage on just eight plays for a total of 13 yards? He’s never lost more than 3 yards on a carry. He might even be good enough to belong on the field at crunch time. By the way, those who continue to say Mack Brown didn’t leave Strong any talent should be reminded that he left him both D’Onta and Armanti Foreman, who rank among the top five players on the team. I’ll also nominate Michael Dickson for All-American punter. Hard to believe a 5-4 team could have two All-Americans, but I truly believe both are deserving.

NFL draft analyst Lance Zierlein likes what he sees in the 249-pound Foreman, who ran for 341 yards as one of five opposing backs who have set career highs against the Red Raiders. “He has excellent foot quickness and acceleration for a man his size, and I was really impressed with his vision and how early he spotted potential trouble when I watched the tape on him this year,” Zierlein said. “I do worry about him carrying as much weight as he carries once he makes it into the pros. That league is so fast that he might benefit from shedding about 10 pounds and getting even quicker.”

For the rest of Kirk’s 9 Things, including his thoughts on Baylor, Patrick Mahomes and Shaka Smart’s second season at Texas, click here.