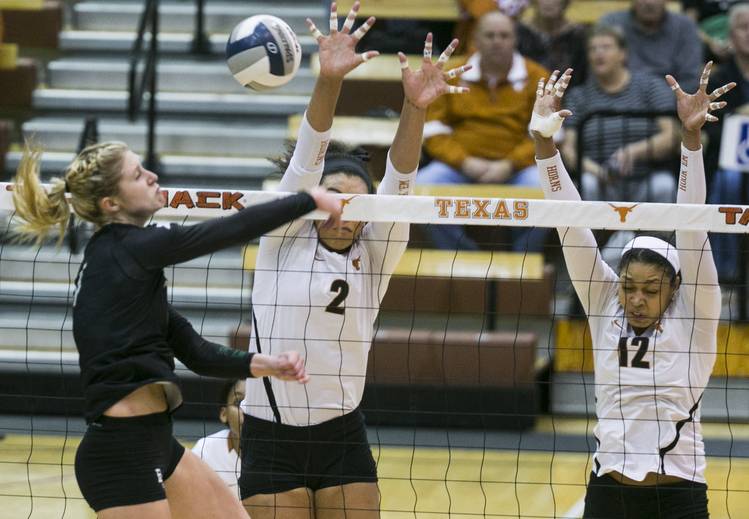 The loss dropped the Longhorns (19-4, 11-2) into second place in the Big 12 standings. Fourth-ranked Kansas (23-2, 12-1) moved into first place with a four-set victory over TCU on Saturday and have won 11 straight conference matches, including a five-set win over Texas in Lawrence in late October. Saturday’s loss dropped the Longhorns to 6-2 in Big 12 road matches this season.

The Cyclones (16-9, 8-5) won their sixth straight Big 12 contest behind 16 kills from middle blocker Samara West. The 6’4 junior hit .400 for the match and had just four errors on 30 attacks. West’s kill total was her season high. Iowa State outside hitter Jess Schaben added 15 kills with 18 digs and Cyclones Morgan Kuhrt and Grace Lazard had 12 kills apiece.

The Longhorns took their first lead in the first set at 14-13 following a 5-1 run. Texas won five of the final seven points to win the set 25-23.

Iowa State broke a 9-9 tie in the second set with two straight points and built a 17-12 lead. Texas managed to cut the lead to three at 24-21, but a service error by Texas gave the set to Iowa State.

The Longhorns scored four straight points in the third set to take a 20-14 lead and held at least a three point lead the rest of the way, winning the set 25-20.

Texas fought back from a 7-4 deficit in the fourth set to take the lead at 9-8. The Cyclones responded with an 11-2 run to go ahead 19-11. Texas rallied to make it a two-point game at 22-20, but two service errors and an attack error by the Longhorns pushed the match to a fifth set.