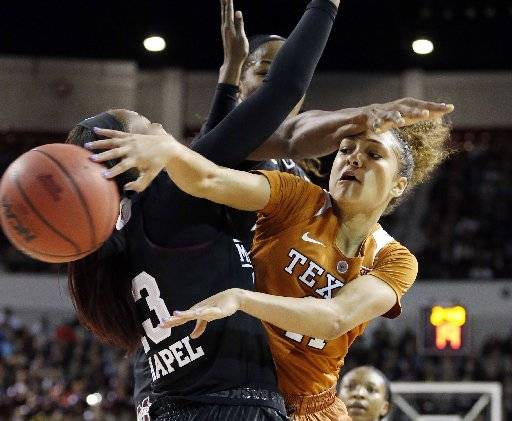 STARKVILLE, Miss. (AP) — Mississippi State stars Victoria Vivians and Morgan William were at their best during the 10th-ranked Bulldogs’ 79-68 victory over No. 8 Texas on Sunday.

That wasn’t a surprise. It’s what the Bulldogs did without those two on the floor that turned some heads. William scored 23 points and Vivians added 19, but it was a second-quarter run largely led by the team’s reserves that helped put the Longhorns away.

“Our kids, that second quarter, really answered the bell and got after it,” Mississippi State coach Vic Schaefer said. “We got some real critical stops and then we really were attacking the rim.”

Mississippi State (4-0) pulled away in the second quarter thanks to some valuable minutes from the bench — especially backup guards Roshunda Johnson and Jazzmun Holmes — and a suffocating defense that held the Longhorns without a field goal for the final 9:40 of the half.

The Bulldogs had a 26-9 advantage in the second quarter to turn a tie game into a 42-25 halftime lead. Johnson had seven points and Holmes added three during the run while Vivians and William were their biggest cheerleaders on the sideline.

“Everybody’s stepped their game up,” Vivians said. “Everybody can go to the basket. Everyone can score.”

Texas (1-2) had 15 turnovers in the first half and 24 in the game. “We got a little frantic in some situations,” Texas coach Karen Aston said.

Brooke McCarty led Texas with 19 points, and Ariel Atkins added 18. Texas lost despite shooting a respectable 27 of 56 from the field (48.2 percent) and outrebounded the Bulldogs 36-26.

The Longhorns pulled within 48-40 in the third quarter, but couldn’t get any closer.

“There were a whole lot of positives,” Aston said. “Even the turnovers, most of them were in the first half. We pulled within in eight points, but then we forced some things. Young kids trying to make something happen every possession.”

William shot 5 of 11 from the field and 13 of 14 from the free-throw line while also adding six rebounds and three steals. Dominique Dillingham added 10 points for the Bulldogs.

INSTANT OFFENSE
Mississippi State played 10 players on Sunday, including nine who were on the roster last season. The only new player was Johnson, a 5-foot-7 junior guard who transferred from Oklahoma State and sat out last season.

She’s been excellent so far this season, averaging nearly 12 points per game as a consistent scoring option with the second team off the bench.

BIG PICTURE
Texas: It’s been a tough start to the season for Texas, which has now lost two of its first three games. Both of those losses — against Stanford and Mississippi State — came against good teams, but they provide ample evidence that the Longhorns have some work to do to be among the nation’s elite.

Mississippi State: The Bulldogs lost to Texas in Austin last season, but won against the Longhorns with relative ease on their home court. Vivians — who is inarguably the team’s best scorer — had a solid game, but it was the consistent production from others like William, Dillingham, Chinwe Okorie and the bench that was most important for Mississippi State.

LIMPING SCHAEFER
Schaefer was noticeably limping during the second half of the game, and the coach said he believed it was his due to a case of gout in his feet. Vivians and William had to nearly carry Schaefer into the postgame press conference.

UP NEXT
Texas: The Longhorns return home to face Northwestern State on Wednesday.

Mississippi State: The Bulldogs face Oregon on Friday in the opening round of the Waikiki Beach Marriott Tournament in Honolulu on Friday.