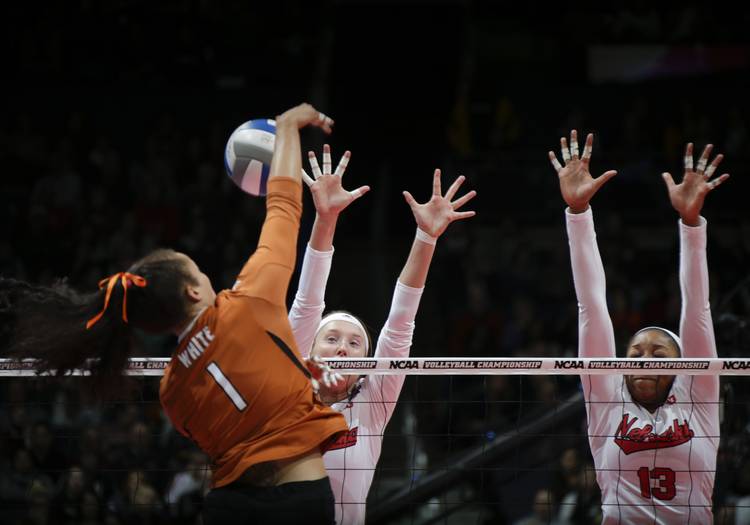 Nebraska outside hitter Kadie Rolfzen (6) and middle blocker Briana Holman (13) rise for a block on a shot from Texas outside hitter Micaya White (1) during the first set in an NCAA women's volleyball national semifinal at Nationwide Arena in Columbus, Ohio, on Thursday, Dec. 15, 2016. (Joshua A. Bickel/Columbus Dispatch/TNS)

COLUMBUS, Ohio – Junior Ebony Nwanebu had 15 kills and No. 4 Texas rolled into the NCAA championship match with a 25-18, 25-23, 25-21 sweep of No. 1 Nebraska at Nationwide Arena. Texas not only improved to 27-4 with the victory, but the Longhorns avenged a loss to the Huskers in last year’s title game. Nebraska (31-3) also swept Texas during this season’s first week.

Texas trailed only once in the opening set as Micaya White and Paulina Prieto Cerame each killed four volleyballs and the Longhorns logged four blocks. The second set featured 14 ties and three lead changes, and Texas overcame four service errors en route to a two-point win. At the intermission, Prieto Cerame led all players with her 10 kills.

Texas controlled much of the third set, but the Longhorns called a timeout when Nebraska pulled within 16-15. Texas, though, responded with a 3-0 run and the Longhorns were able to beat Nebraska to the finish line. The Longhorns closed out the match on a Morgan Johnson kill.

Awaiting Texas in Saturday’s championship match will be a Stanford team that upended second-seeded Minnesota in four sets. Kathryn Plummer and Inky Ajanaku each contributed 15 kills for the No. 6 Cardinal.

Chris Simms: Major Applewhite ‘treated me like crap’ at Texas