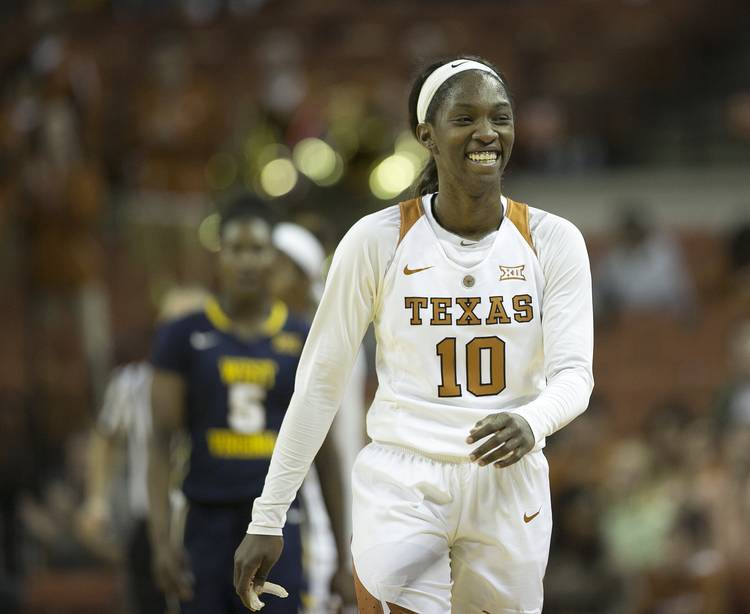 Texas's Lashann Higgs smiles after getting the ball back against West Virginia during the second half at the Frank Erwin Center on Sunday, January 29, 2017. Texas beat West Virginia 59-64. DEBORAH CANNON / AMERICAN-STATESMAN

Brooke McCarty hit back-to-back three-pointers to open the fourth quarter to ignite No. 12 Texas to a 69-54 victory over No. 22 West Virginia Sunday afternoon at the Erwin Center.

The Longhorns improved their winning streak to 14 games and tied Baylor for first place in the Big 12 standings for women’s basketball.

Texas led WVU 48-45 after three quarters. But McCarty’s three-pointers helped the Longhorns run off 12 straight points to open the fourth quarter. Capped by a banker by Ariel Atkins, Texas led 60-45 with 5:05 to play.

The Longhorns honored about 40 former players and coaches during the annual Texas Exes Day. Among the women who returned to the Erwin Center were Kim Basinger and Nancy Walling from the 1970s, Andrea Lloyd and Lyssa McBride Seale from the 1980s, Edna Campbell and Nekeshia from the 1990s, Brittainey Raven and Alisha Sare from the 2000s and Hall of Fame coach Jody Conradt.

Lang scored 11 points in the first half and Lashann Higgs 10 to help the Longhorns grab a 30-26 halftime lead. WVU Alexis Brewer led the Mountaineers early with 7 points, going 2-for-2 from the field and 2-for-2 from the foul line.

UT’s next game will be Wednesday night at Oklahoma State. The next home game will be against Kansas State at 5 p.m. Saturday. Tipoff will be at 5 p.m. and will be televised by the Longhorn Network.