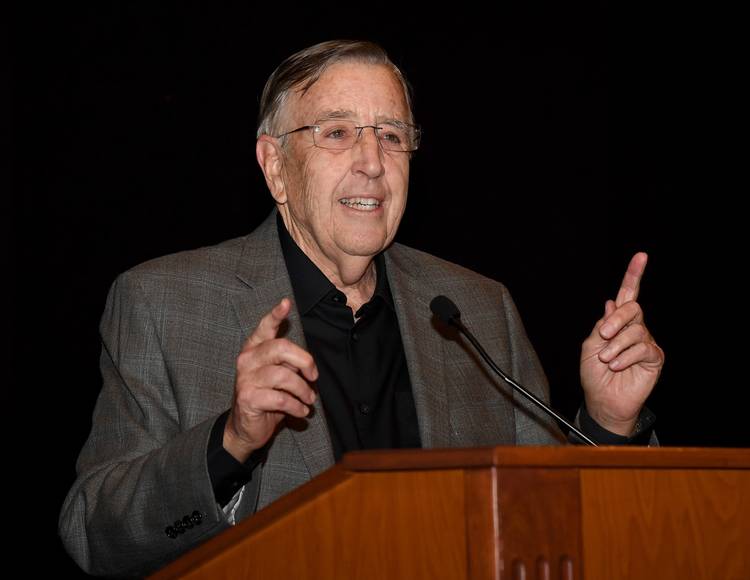 Brent Musburger believes in Tom Herman and expects Texas football to return to national prominence very soon. “I think he has a chance to be outstanding,” the recently retired broadcasting icon said on our “On Second Thought” podcast that will be available Thursday. “I got to know him when he was the offensive coordinator at Ohio State. He’s a tremendous football mind. There’s no reason why Texas shouldn’t be contending for the Big 12 championship every year because there’s such a great talent pool in that state.” Musburger retired after four decades of broadcasting everything from the NFL and NBA to the Little League World Series and NASCAR so he can start a sports handicapping business in time for March Madness. Asked what he’d set the odds at for the Longhorns to reach next year’s College Football Playoff, he said, “That’s 100 to 1.”

What do cookies have to do with Texas’ 2OT win over Florida State on Monday?

Her players joke about it now, but in her first seasons on the job, Karen Aston practiced tough love for her Texas women’s basketball teams. She took away their cookies on road trips. “I told them if we don’t play well, we’re not getting cookies,” Aston said Tuesday. “It’s been an ongoing joke since then.” The Longhorns got their chocolate chip cookies and ate ’em too after whipping fourth-ranked Florida State in double overtime Monday night. But they’re still hungry for a 1 seed in the NCAA Tournament and should get one if they win at Oklahoma on Saturday and at home against vengeful Baylor on Monday. “This team has a little bit of a different resilience,” she said. “When they get down, they don’t have a panic button.” But they do have Brooke McCarty, who produced a career-high 29 points and played all 50 minutes of the game. And they got contributions from everyone on the team, including reserves, as Jordan Hosey made two big defensive plays, Olamide Aborowa threw in a lead-securing layup and freshman Jada Underwood grabbed a decisive rebound. “We had to play players who hadn’t been in that situation, and they stepped up,” Aston said. “That’s the biggest piece to the win. They’re improving tremendously. I hadn’t felt comfortable playing ’em in heated moments, but this gives me some trust.” If Aston isn’t already the national coach of the year, who is? Maybe this run will keep them as far as possible from UConn, which won its 100th in a row Monday night. “That’s an amazing accomplishment. It’s hard to even grasp. We’ve won 19 in a row, and we’re on the top of the world.” And eating cookies.

On Shaq Cleare’s improvement this season:

Three of Shaka Smart’s players have improved tremendously, none more than center Shaq Cleare, who has milked every ounce out of his potential. The other two are forward Jarrett Allen and point guard Andrew Jones, both freshmen. My biggest takeaway in almost two seasons is the drastic improvement of big men such as Cleare and last year Cam Ridley and Prince Ibeh. That’s a tribute to both Smart and big-man coach Darrin Horn.

For the rest of Kirk’s 9 Things, including his thoughts on the UT baseball season and the Big 12’s action against Baylor, click here.