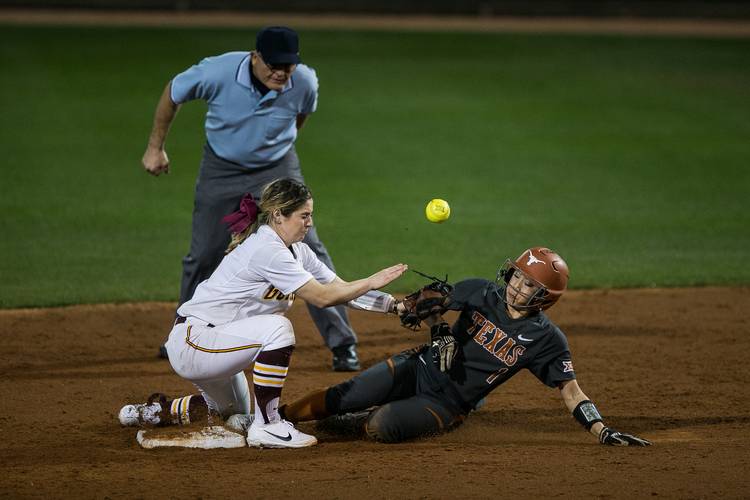 Stephanie Wong safely slides into second base during a game against Minnesota at McCombs Field on Friday, Feb. 10, 2017. Texas lost both of its games against Minnesota this past weekend at the Texas Classic. CREDIT: Tamir Kalifa/ AMERICAN-STATESMAN

Opening week has come and gone. What did we learn about Texas’ softball team?

IN THE CIRCLE: All five Texas pitchers got time in the circle, but it’s hard to compare each one due to the discrepancy between the competition. Kristen Clark (Maryland), Bolinger (Colorado State) and Paige von Sprecken (Colorado State) each picked up wins while Wright and Davis took the Minnesota losses.

Collectively, Texas’ pitchers had a 3.06 ERA, a .214 batting average against, 26 strikeouts and 20 walks. Those numbers don’t reflect dominance, but aren’t bad for an opening weekend.

ON DECK: Texas hosts the Texas Invitational this weekend that includes two undefeated teams in Louisiana Tech (5-0) and South Carolina (5-0). Indiana (3-2) also is in the field. The Longhorns and Hoosiers get things started Thursday at 6 p.m. The Gamecocks are the closest thing to a ranked opponent, having received 10 votes in this week’s NFCA/USA Today poll. … It will be a homecoming for Indiana sophomore pitcher Emily Kirk, who’s a graduate of Stony Point.

Islanders with their first win of the year in memorable fashion! Liz Carter no-hitter! #GoDers pic.twitter.com/jNn0JuRO3x

AROUND THE HORN: Here’s a quick look at a few storylines from around the Big 12 and with Texas opponents:

For the 2nd time in the last three seasons, #KUsoftball is off to a perfect 5-0 start!#JayhawkWay pic.twitter.com/52cSlV0Ap0

BIG 12 POWER POLL: Kansas is the only team that went undefeated last weekend, but the Jayhawks didn’t really see that strong of competition; still, they do jump to No. 3 in this week’s power poll.

Episode 44 of On Second Thought: Brent Musburger on his career, Texas football, Joe Mixon and life after ESPN

Threat of weather alters Sunday schedule for Longhorns and Owls