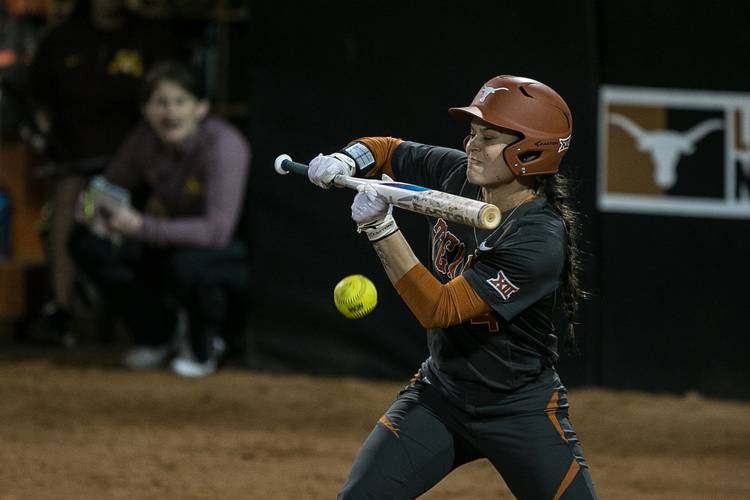 Kristen Clark pitched a complete game and Devon Tunning had two runs batted in as the Texas Longhorns softball team defeated Indiana 2-1 in the first game of the Texas Invitational at McCombs Field on Thursday night.

The contest was the first of ten games scheduled at the Texas Invitational from Thursday through Sunday, including five games for Texas.

Tunning was 2 for 2 with a double, a home run and two RBIs to help Texas edge out the Hoosiers. Reagan Hathaway was the only other Longhorn to have a hit in the game as Tara Trainer (1-3) allowed two runs on three hits and struck out seven in the loss. Trainer also walked five batters.

Clark (2-0) picked up her second win as she allowed one run on six hits while striking out three. The Hoosiers (2-4) managed to hit three doubles off of Clark, but they were only able to score one run.

Rachel O’Malley was 2 for 3 with an RBI double for Indiana. CaraMia Tsirigos and Aimilia McDonough each had doubles for the Hoosiers.

The Longhorns (4-2) scored both runs in the first inning when Tunning homered with Stephanie Wong on base. Indiana’s lone run came in the top of the sixth as O’Malley doubled to score Taylor Uden.

Four games are slated for Friday, beginning with Louisiana Tech vs. Indiana. The Longhorns will then take on Louisiana Tech at 12:30 p.m. before facing South Carolina at approximately 3 p.m.

Indiana and South Carolina will close out Friday’s Texas Invitational action at 5:30 p.m.

Beau Hossler leads after first round in Web.com Tour debut