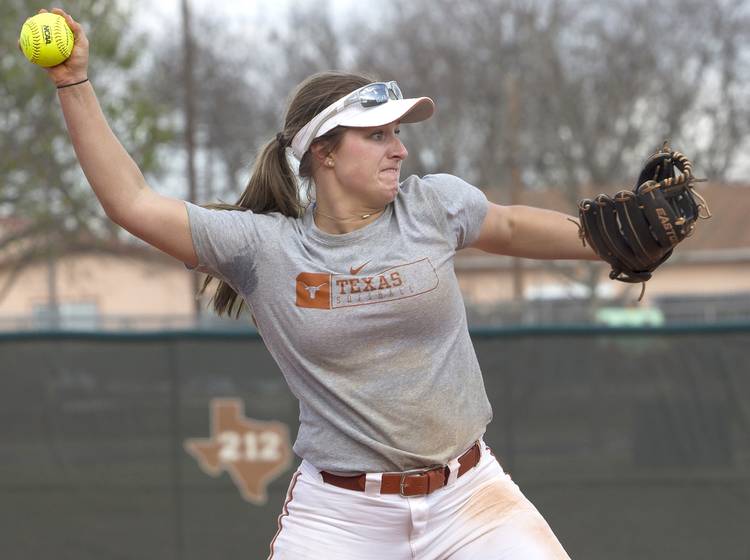 Texas' Mickenzi Krpec makes a throw during the second day of practice for the 2017 season at McCombs Field Thursday, Jan. 12, 2017. (Stephen Spillman / for AMERICAN-STATESMAN)

The Texas Longhorns softball team scored a run in each of the final two innings to secure a 4-3 win over Notre Dame in their opening game at the Mary Nutter Classic in Cathedral City, Calif. on Thursday.

Mickenzi Krpec hit a single with the bases loaded in the bottom of the seventh to bring Celina Felix home for the win.

Devon Tunning hit her third home run of the season in the first inning to give the Longhorns a 2-0 lead before Notre Dame rallied to tie the game in the seventh. Tunning finished the game 2 for 4 with a run scored and two RBIs.

Stephanie Wong and Reagan Hathaway each scored runs for Texas.

Notre Dame (4-6) scored a run in each of the second and third innings to tie the game. Caitlyn Brooks homered in the second inning before an RBI single by Melissa Rochford tied the game in the third.

Texas (8-3) took a 3-2 lead in the sixth when Bekah Alcozer singled and an error allowed Hathaway to score.

Erica Wright was poised to pick up the win for Texas but she gave up a home run in the top of the seventh to Kimmy Sullivan to tie the game. Wright allowed three runs on eight hits through 6 1/3 innings. She struck out five and didn’t allow a walk.

Brooke Bolinger (3-0) didn’t allow a hit in 2/3 innings of relief and picked up the win.

With two runners on base after Notre Dame tied the game in the seventh, Wong caught a liner and doubled up the runner at second to end the inning.

The Longhorns are schedule to face Missouri late Thursday night before taking on Bethune-Cookman Saturday at 12:30 p.m.