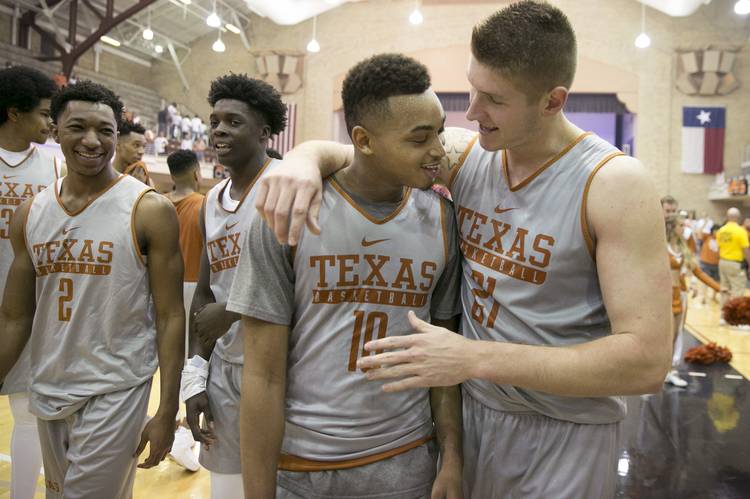 Who will provide leadership next year for Shaka’s squad?

Shaka Smart says watch out for Tulane transfer Dylan Osetkowski, who’s sitting out this season. Asked who could provide some leadership next year, Smart said of the 6-9 banger, “The best candidate for that would be Dylan. I’m not saying he’s a savior who is going to come in and average 20 (points) and 10 (rebounds), but he’s the most outspoken and the most hungry. Eric (Davis Jr.) and Snoop (Kerwin Roach Jr.), those guys have two years under their belt. They’re really going to have to figure out their place and their role and the level of influence they want to have. They’re going to need to take a big jump.” … The high-character Davis may not have excelled this season, but he showed up and served orange juice to 300 at the Foundation for the Homeless breakfast at 5 a.m. Tuesday. He said he does it because “it puts things in perspective.”

Is Texas not DBU, but BKU?

Craig Naivar has a new twist on Texas’ boast that it is DBU. “Everybody talks about us as DBU, and they should. Hey, this is Big Kicker U,” the new Longhorns special teams coordinator/safeties coach said. He’s right. Few if any schools can match Justin Tucker, Phil Dawson, Raul Allegre, Kris Stockton, Jeff Ward and a dozen others. Naivar loves new kicker Joshua Rowland, a second-team junior college All-American who hit nine of 12 field goals for Mississippi Gulf Coast last year. “He has a tremendous mindset,” Naivar said.

Is Augie Ball officially dead for the Longhorns?

Are you sitting down? The Texas baseball team has two sacrifice bunts in eight games. Two. Kansas State leads the Big 12 with 9. Only TCU with zero has fewer sac bunts than Texas, which had 12 by this point last season — four by Bret Boswell, who’s yet to lay one down but is hitting .333 with a homer and two doubles. Texas had 75 sacrifice bunts all of last year. Now if David Pierce can just cut down on his team’s Big 12-worst 75 strikeouts, 14 worse than runner-up Kansas.

For the rest of Kirk’s 9 Things, including his thoughts on the upcoming Dell Match Play WGC, Darren Woodson’s connection to Texas and Baylor hoops, click here.