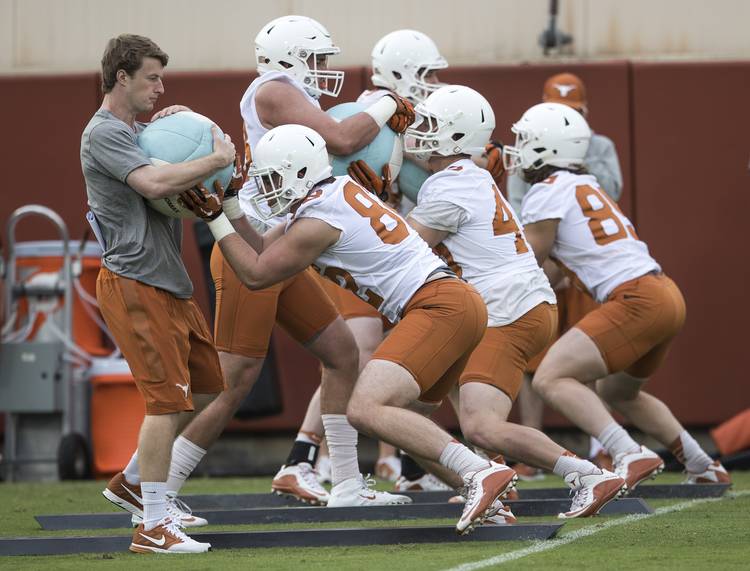 Texas held the second of its spring football practices on Thursday, and the media was granted access to about 30 minutes of the drills. Here are three observations from American-Statesman sportswriter Danny Davis:

1. Texas coach Tom Herman said on Monday that he wouldn’t name a starting quarterback this spring, and there were no reasons given on Thursday to make the media believe he had changed his mind. Both incumbent Shane Buechele and newcomer Sam Ehlinger worked out with a mix of skills players in the open session.

Todd Dodge, who was Ehlinger’s coach the last three years at Westlake High, was one of the onlookers at Thursday’s practice.

2. During part of the open practice, Texas tight ends practiced blocking with assistant coach Corby Meekins. With Andrew Beck nursing a broken foot, Peyton Aucoin and Garrett Gray were the only scholarship recipients in the group. Aucoin redshirted during the 2016 season. Gray was recently converted back to that position after a run at wide receiver.

Under the watchful eye of Meekins, Robert Willis, Michael Wilson and Chris Fehr also worked out against a blocking sled.

3. An updated roster was handed out on Thursday as several players were wearing digits that did not correspond with the roster that was released earlier in the week. If you’re scoring at home, here are the new jersey numbers for the Longhorns. The previous numbers are listed in parenthesis:

Throwback Thursday: As Vince Young signs with the CFL, that time Ricky Williams was in the league