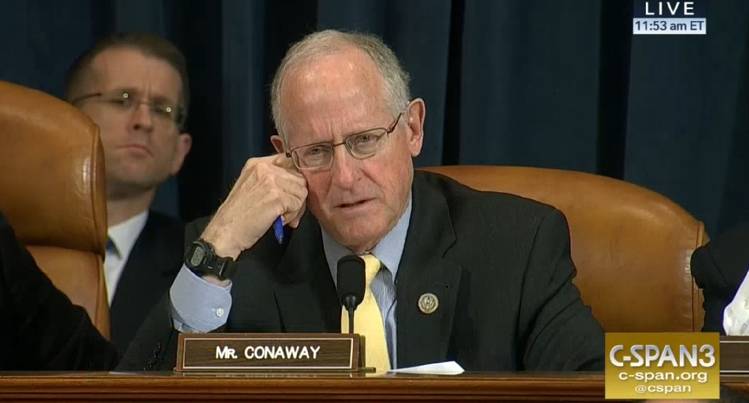 As if it weren’t surreal enough that the director of the FBI is testifying to Congress about Russian meddling in the U.S. presidential campaign, consider what happened when a West Texas congressman tried to use the Texas Longhorns and Texas Tech Red Raiders to make a point during Monday’s high-profile hearing.

Comey told Conaway that he and other experts concluded that Russia had sought to “hurt our democracy, hurt her, help him.” Conaway sought to pin Comey down on the idea that Russian President Vladimir Putin had  “clear preference” for Trump.

Comey: “I think that was a fairly easy judgment for the community. Putin hated Secretary Clinton so much that the flip side of that coin was that he had a clear preference for the person running against the person he hated so much.”

Conaway: “Yeah, that might work on Saturday afternoon when my wife’s Red Raiders are playing the Longhorns. She really likes the Red Raiders, but all the rest of the time … The logic is that because he really didn’t like candidate Clinton that he automatically liked Trump. That assessment is based on what?”

Minutes later, Comey went back to the Longhorns vs. Red Raiders analogy. “The assessment of the intelligence community was that as the summer went on and polls appeared to show that Secretary Clinton was going to win, the Russians sort of gave up and simply focused on trying to undermine  her. It’s your Red Raiders. You know they’re not going to win so you kind of hope key people on the other team get hurt so they’re not such a tough opponent down the road.”

50 in 50: Is Texas ready to put past defensive failures behind?