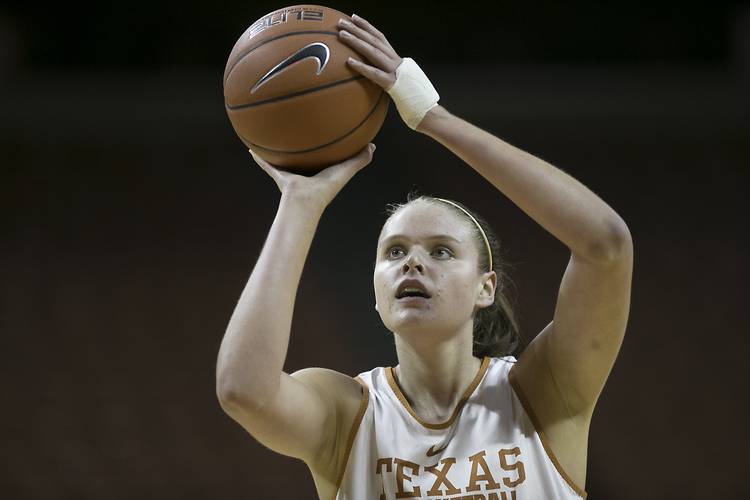 Texas' center Kelsey Lang hopes to hook up with the WNBA's Dallas Wings this spring. Photo by Ralph Barrera/ AMERICAN-STATESMAN

After a stellar career at Texas, senior post Kelsey Lang is eager to start a new basketball chapter in her life.

It begins Sunday. In Dallas.

The 6-5 Longhorns post signed a training camp contract with the Dallas Wings of the WNBA on Monday.

“I’m just really excited to have the opportunity to go to Dallas,” Lang said Wednesday. “I’ve spoken with some of the coaching and support staff and I know they’re happy to have me. I’m excited and ready to go.”

Lang played in 138 games with 83 starts at Texas. Lang played in more games for the Longhorns than any player since 1983. She finished with 1,086 career points, which ranks 36th all-time in program history. Lang also blocked 190 career shots, which is sixth all-time in school annals. For her career, Lang shot 52.7 percent (483-of-916) from the floor.

“We are so proud for Kelsey that she will have an opportunity at a WNBA training camp, in particular in her home state of Texas,” Texas head coach Karen Aston said. “The Dallas Wings will find that Kelsey is one who will catch on quick, pay attention to detail and will bring her lunch pail every day. Kelsey has worked hard to be blessed with this opportunity and I know she will make the most of it in the upcoming weeks.”

Lang was an Honorable Mention All-Big 12 selection as a senior in 2016-17, playing in all 34 games with 32 starts and averaging 27.0 minutes per game. She led her team in blocked shots with 2.3 rejections per game, which ranked second in the Big 12 Conference. Lang recorded seven double-doubles on the year and was her squad’s second-leading rebounder at 7.6 boards per game, which ranked ninth in the Big 12. She was her team’s leader in field goal percentage with a .527 (139-of-264) clip and was fourth on the squad in scoring at 7.6 boards per game.

Lang will earn her bachelor’s degree in economics this May. She was a CoSIDA Academic All-District selection in 2017, becoming just the fifth player in school history to earn that distinction. She also was a four-time selection to the Academic All-Big 12 teams and, in 2017, was a top-30 nominee for the Senior CLASS Award.