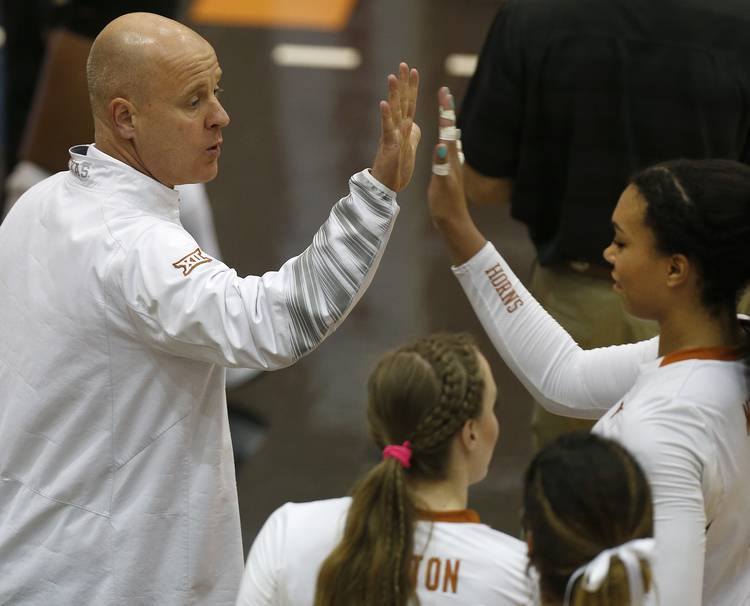 Texas head coach Jerritt Elliott high-fives Ebony Nwanebu (2) during the second round of the 2016 NCAA tournament on Dec. 3, 2016. Texas will return to the tournament this weekend. (Stephen Spillman / for American-Statesman)

This fall, Texas will return three All-Americans, a longtime libero and several other contributors to its volleyball court.

You can officially add the nation’s top recruiting class into the mix.

PrepVolleyball.com announced on Thursday that Texas had signed the top-ranked collection of recruits for the Class of 2017. In November, Texas signed outside hitter Lexi Sun, middle blocker Brionne Butler, setter Ashley Shook and libero Olivia Zelon. Butler and Zelon enrolled early and participated in spring drills as Texas.

Texas’ ascension to the top of PrepVolleyball.com’s list was merely a matter of math. Sun, who was named the Gatorade Player of the Year earlier this year, was the website’s top recruit. Butler and Shook were respectively ranked second and sixth.

This is the first time that Texas has topped the recruiting rankings since Khat Bell and Haley Eckerman signed with the Longhorns in 2011. Since 2003, Texas head coach Jerritt Elliott has signed the second-best class during five recruiting cycles.