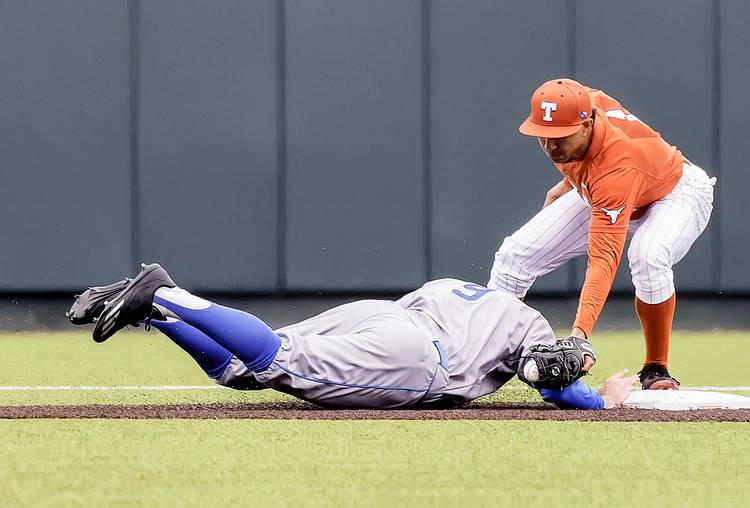 UT shortstop David Hamilton barely misses the tag on UCLA's Brett Stephens at second base during the baseball game between the UT Longhorns and the UCLA Bruins at UFCU Disch-Falk Field on Sunday March 12, 2017. JOHN GUTIERREZ / FOR AMERICAN-STATESMAN

LONG BEACH, Calif. — Backed by Nolan Kingham on Friday, Texas opened its 58th appearance at the NCAA tournament with a 3-2 win over UCLA. On Saturday, Texas (38-22) will play the winner of a game between Long Beach State and San Diego State.

The first game in the Long Beach State-hosted regional featured a pitching duel between Kingham and UCLA ace Griffin Canning. Kingham allowed a leadoff hit at Blair Field, but the all-conference right-hander threw only 24 pitches over the first three innings. Canning held Texas hitless during the same span of time.

The Longhorns got some offense in the fourth inning, when Kacy Clemens clubbed a two-out pitch over the fence in right field. Bret Boswell and Travis Jones drove in runs in the seventh and eighth innings, which provided Kingham with the necessary run support. Kingham struck out five over his 7.2 innings, and he gave up six hits and an eighth-inning homer.

Canning, who is a projected first round pick in this month’s MLB Draft, also went 7.2 innings on Friday. He surrendered six hits and two earned runs. To stay alive in this double-elimination competition, UCLA (30-26) needs to beat either Long Beach State or San Diego State on Saturday.