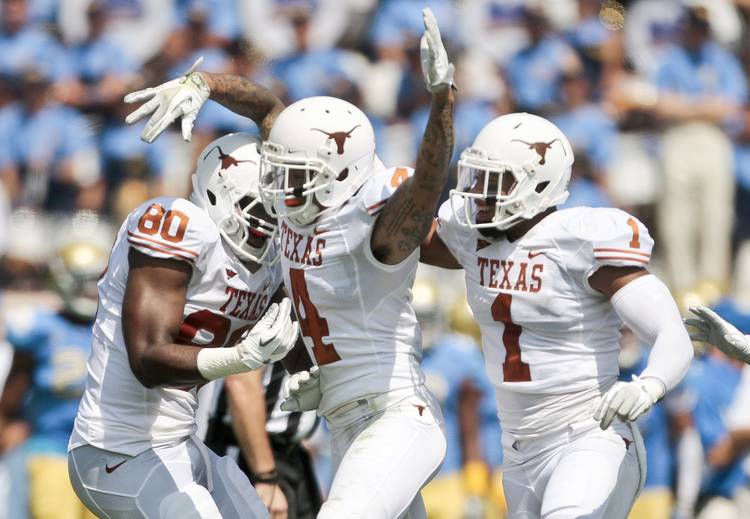 FILE - In this Sept. 17, 2011, file photo, Texas safety Kenny Vaccaro (4) celebrates intercepting a pass by UCLA quarterback Kevin Prince with teammates Keenan Robinson (1) and Alex Okafor (80) during an NCAA college football game in Pasadena, Calif. Okafor joined the New Orleans Saints as a free agent this offseason, hoping to start at defensive end after playing as a reserve last season with the Arizona Cardinals. In New Orleans, Okafor has joined one of his best friends and former college teammate at Texas, safety Vaccaro. Vaccaro says Okafor is a dream fit for New Orleans defense. (AP Photo/Bret Hartman, File)

METAIRIE, La. (AP) — New Saints defensive end Alex Okafor hopes he can live up to the billing he received from his old friend and former Texas Longhorns teammate, Kenny Vaccaro.

“He definitely stuck his neck out for me,” the Pflugerville High School grad said about Vaccaro, a Saints starting safety who advised New Orleans to seriously consider acquiring Okafor in free agency this offseason.

“It’s surreal,” Okafor said. “Not many guys get to go back and play with some of their college teammates that, I mean, are as close as we are.”

After spending last season as a situational reserve with Arizona, Okafor has been working with the first-team defense in New Orleans, on the opposite side from top Saints defensive end Cameron Jordan, during voluntary offseason practices that began last week.

New Orleans has spent the past two seasons trying to find strong edge pass-rusher to complement Jordan, something they’ve been missing since releasing Junior Galette before the 2014 season.

The 6-foot-4, 265-pound Okafor has shown the potential to be the player New Orleans needs, racking up eight sacks in just 13 games in 2014. Last season, however, he was moved into a reserve role, primarily rushing from the edge in passing situations, and had 3 1/2 sacks in 15 games.

“He’s a talented player who has size and length, which helps him as a rusher,” Saints defensive coordinator Dennis Allen said last week. “The biggest thing for him is the ability to stay healthy. When he’s been healthy, he’s had better seasons.

“I’m excited about him,” Allen added. “He brings a veteran presence to the defense, and there’s certainly a spot for him to have on the defensive front. So we’ll see.”

Okafor’s injury history is comprised mostly of the minor, nagging variety, including calf and toe injuries during the 2015 season and a biceps injury last year.

Okafor described his past injuries as “nothing that would shave years off my career. So, if anything, I’m fresher than most five-year guys.”

Okafor’s father is a Nigerian who moved to the United States to attend college at Grambling State in north Louisiana and married an American. When Okafor was young, he attended several games in the Louisiana Superdome with family — not Saints games, but the Bayou Classic between Grambling and arch rival Southern.

Okafor started 25 NFL games combined for Arizona during the 2014 and 2015 seasons, and while he did not dislike his strictly pass-rushing role with the Cardinals last season, he intends to prove he remains a good every-down player.

“It’s just a fresh start and a great opportunity,” Okafor said. “I’ve been that guy before and I know I can be that here.”

During Okafor’s and Vaccaro’s four years together with the Longhorns, they became close. Vaccaro said that if he was enjoying the nightlife on Austin’s 6th Street or getting a late-night meal, it was usually with Okafor.

“Alex comes from a great family. He’s a good person. I realized right when I got to Texas that this is a guy I need to stick with,” Vaccaro recalled.

They have remained close since, working out together during offseasons, and Vaccaro figured it wouldn’t hurt to ask the Saints to “take a peak” at Okafor with the defensive end entering free agency.

“I sat there and looked at the opposite end position beside Cam and it’s kind of been not there since Junior left,” Vaccaro explained. “So I was like, ‘OK, if I’m a free-agent guy, what team do I want to sign with so I have a chance to start?’ Arizona had him dropping (into pass coverage) a little bit. He’s not an outside ‘backer. He’s a true 4-3 end and that’s what we’re having him do. So it ended up being a dream-like fit for him.”

While Vaccaro figures Okafor’s opportunity to start is his primary reason for signing a one-year deal with the Saints, he says their friendship was also a factor and they are cherishing the opportunity to be teammates again.

“It’s great. People don’t understand the magnitude” of being able to play with a close college friend as a pro, Vaccaro said. “It just makes you want to smile. Just to line up next to your friend during the National Anthem in the National Football League — that does not happen, ever, really. The percentage to be in the NFL is already low. To play with your best friends, or people you played with your whole life, is probably zero, basically.”