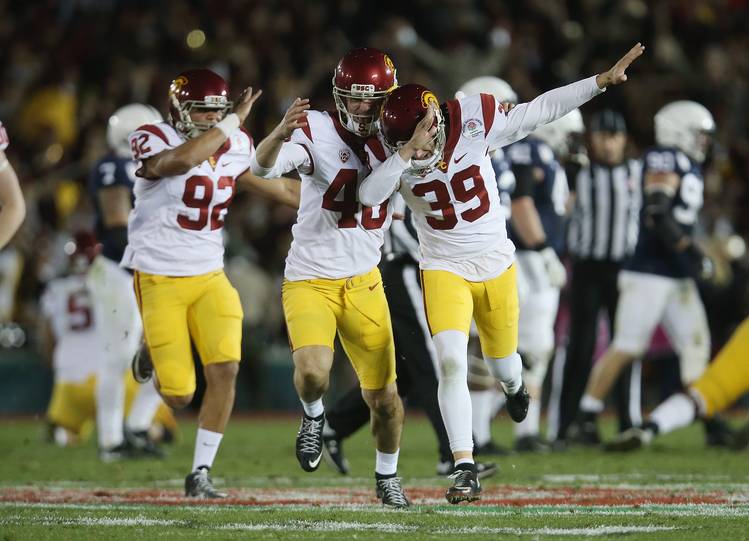 PASADENA, CA - JANUARY 02: Place kicker Matt Boermeester #39 of the USC Trojans (R) celebrates with teammates after making the game-winning 46-yard field goal in the fourth quarter to defeat the Penn State Nittany Lions 52-49 in the 2017 Rose Bowl Game presented by Northwestern Mutual at the Rose Bowl on January 2, 2017 in Pasadena, California. (Photo by Stephen Dunn/Getty Images)

Matt Boermeester was at the center of one of the lasting memories of the 2016 college football season when he drilled the walk-off winner in USC’s thrilling Rose Bowl win over Penn State.

As a key piece for the rising Trojans, it only makes sense for him to be on this list as one of the top specialists Texas will face this season, right? Well, it would have made perfect sense before Boermeester likely got himself kicked off the team this offseason for “a code of conduct issue.” Boermeester was indefinitely suspended back in February, and so far there’s been no indication he’ll return.

Boermeester’s replacement appears to be redshirt freshman Michael Brown. Expectations are sky high for USC, and Brown will be under intense pressure to perform. He won’t get much of a warmup, either, with Stanford coming to the Coliseum one week before the big showdown with Texas. This is certainly a storyline worth watching leading up to Sept. 16.