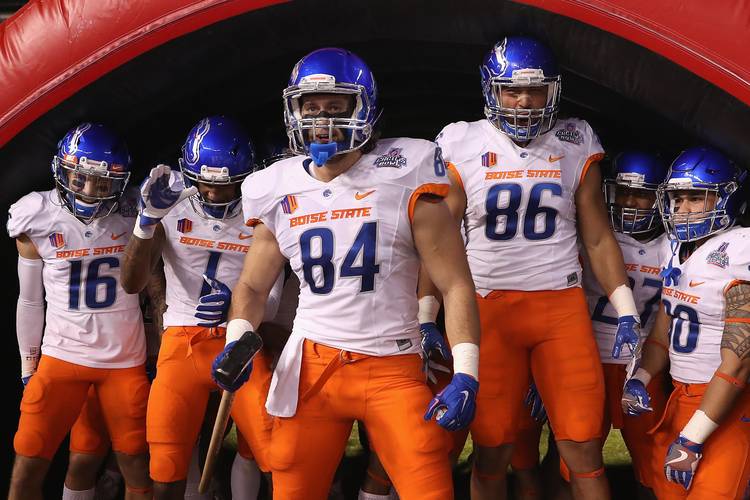 Tight end Jake Knight #84 of the Boise State Broncos leads teammates onto the field before the start of the Motel 6 Cactus Bowl against the Baylor Bears at Chase Field on December 27, 2016 in Phoenix, Arizona. (Photo by Christian Petersen/Getty Images)

Best-case scenario: Junior quarterback Brett Rypien continues to develop under the tutelage of fourth-year coach Bryan Harsin, a former offensive coordinator at Texas. Rypien has a proven target in receiver in Cedrick Wilson, and Boise State’s passing game hopes to build on last season’s average of 298 yards a game.

Worst-case scenario: A young offensive line can’t protect Rypien or open holes for new running back Alexander Mattison, and the Broncos fail to consistently move the chains. If a run defense that ranked 69th in the nation a year ago can’t improve, Boise State will struggle to get off the field in a conference that likes to run the football.

The key game: Oct. 21, Wyoming. The Broncos reached No. 13 in the polls after last year’s 7-0 start, but a 30-28 loss at Wyoming triggered a rocky final six weeks. This year’s meeting features a battle between two of the nation’s most accomplished quarterbacks in Rypien and Wyoming’s Josh Allen.

Spring cleaning: Eight projected starters were either limited or missed spring practice completely, but several younger players impressed with extended reps. In particular, Boise State showed off a promising collection of skill players, including running back Ryan Wolpin and receivers Sean Modster, A.J. Richardson and Bryan Jefferson. … The Broncos’ 2017 signing class ranked 63rd nationally but led the Mountain West; there was only one four-star, Virginia athlete Jermani Brown, who’s expected to be a defensive back.

Let him Ryp: Rypien led the Mountain West with 3,646 passing yards last season and ranked second with 24 touchdown passes. His uncle, former Washington Redskins quarterback Mark Rypien, earned Most Valuable Player honors while leading the Redskins to victory in Super Bowl XXV, and Brett quickly acknowledges the influence of his uncle. “He’s been there for me at every level I’ve played at, and it’s nice having a guy who understands because he’s been there at so many levels,” he told the Seattle Times.

Feeling blue: Famed for its blue turf, Boise State also owns a trademark that requires any school at any level of play that wishes to install an artificial turf field in any color but green to first receive permission from Boise State, according to ESPN. That would include Canyon High in New Braunfels, which plays on a red turf. Last month, Albertsons Stadium’s blue turf was ranked No. 1 on Athlon Sports’ 50 most significant college football developments of the past 50 years.

RELATED: Here’s how and why Boise State controls who installs non-green playing fields