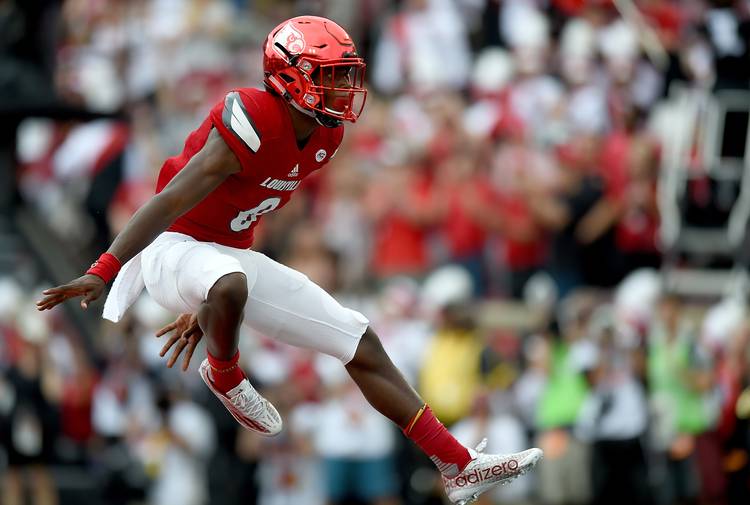 Lamar Jackson #8 of the Louisville Cardinals celebrates after a Louisville touchdown during the game against the Florida State Seminoles at Papa John's Cardinal Stadium on September 17, 2016 in Louisville, Kentucky. (Photo by Bobby Ellis/Getty Images)

Best-case scenario: The Cardinals recapture the electricity they showed in 2016. Junior quarterback Lamar Jackson puts up magical numbers as he did with 5,114 total yards and 51 touchdowns in last year’s Heisman Trophy season, develops as a better downfield passer and works on throwing the ball away to avoid the rush. The young offense matures quickly to make a national title run and the defense shores up after allowing 49 plays of 20 yards or more.

Worst-case scenario: The offensive line, missing its three interior starters from a group that allowed an astounding 46 sacks in 2016, fails to gel. The rash of running back injuries that began in the spring continues. Jackson has to run for his life again as he did during the team’s three-game losing streak to end last season when the Cardinals scored 10 and 9 points in two of them and wound up in a minor bowl.

The key game: Oct. 21, at Florida State. Without a bye in the first nine weeks of the season, Louisville has to travel in Week 8 to a vengeful, legitimate CFP championship contender Florida State, which is still smarting from its 63-20 spanking last year.

Coach: Bobby Petrino (fourth year, 67-22; 109-43 overall at Louisville and Arkansas. Petrino is in his second stint at Louisville)

Spring cleaning: Peter Sirmon and Todd Grantham traded jobs — Sirmon left his job as Mississippi State’s defensive coordinator to replace the fiery Grantham at Louisville, and Grantham replaced Sirmon in Starkville. Sirmon supposedly is simplifying the playbook. … Running back was an issue; Jeremy Smith (surgery for a fractured foot) and Dae Williams (ACL) suffered injuries and Malik Williams was coming off late-season knee surgery. Maybe Reggie Bonnafan, who has played quarterback, running back and wide receiver, will be moved back to running back. … Louisville’s signing class ranked 32nd nationally, but it was considered the greatest haul for offensive linemen in school history — one guard and four tackles.

Defensive woes: Five of the team’s top eight tacklers from 2016, including star cornerback Jaire Alexander, are back. Alexander had five interceptions, two off Clemson’s Deshaun Watson, and returned a punt for a 69-yard touchdown against Florida State. All four of Louisville’s starters in the secondary return, but they gave up an ACC-worst 29 touchdowns through the air.

The highs and lows of scheduling: A favorable non-conference schedule (Purdue, Kent State and Murray State) eases the load, but a road game at North Carolina in Week 2 and a home game with Clemson the following week will tell the tale. The opener against the Boilermakers comes against former Louisville star quarterback and new Purdue coach Jeff Brohm, who takes over after a 30-10 record in three stellar seasons replacing Petrino at Western Kentucky.

Back for more: Jackson might play under center more and promises to be an even better decision-maker in 2017 as he attempts to duplicate Archie Griffin as the first (and only) two-time Heisman winner in 42 years. He’s a good guy who idolized Michael Vick as a Florida high schooler who loved the Miami Hurricanes, and he noted that when Johnny Manziel came to his New York hotel room after the Heisman ceremony to visit, the 2012 winner told him the award “was just the beginning.”

No. 14: Coming Sunday. Want a hint? This school’s mascot, named the nation’s best by Sports Illustrated in 1997, attended the 1982 Heisman Trophy ceremony wearing a tuxedo.