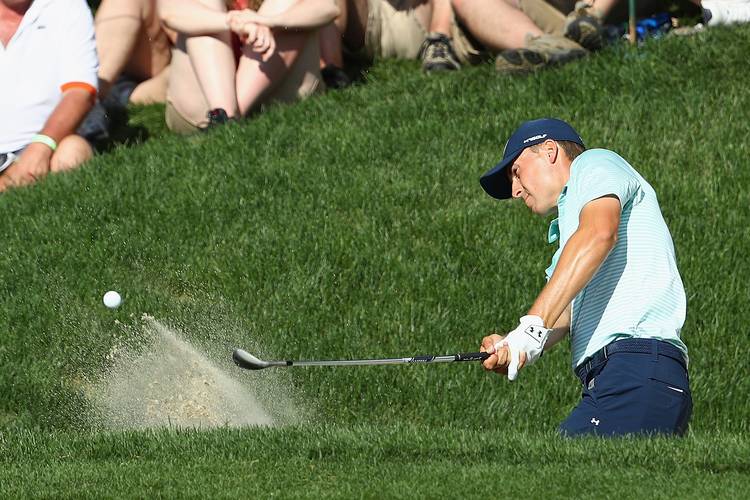 Jordan Spieth of the United States plays a shot from a bunker on the 15th hole during the third round of the Travelers Championship at TPC River Highlands on June 24, 2017 in Cromwell, Connecticut. (Photo by Maddie Meyer/Getty Images)

With a chance to close out the match, Jordan Spieth fired his second shot into the par-5 15th at Royal Birkdale and it never left the flag, bounding onto the green about 20 feet behind the hole.

His partner Tuesday was Justin Thomas, who watched the flight of the ball and said, “I like having him on my team when he’s playing like this.”

Everyone is on their own when the British Open begins on Thursday, and Spieth is looking sharp enough to be listed as a co-favorite with Dustin Johnson, the No. 1 player in the world. Spieth is coming off his second victory of the year last month at the Travelers Championship. And when his putter is working — it really hasn’t been this year — he is regarded as a favorite at just about any tournament.

Still to be determined is how much he thrives on links courses like Royal Birkdale.

What stands out is St. Andrews in 2015, when the 23-year-old Texan was going for the third leg of the Grand Slam and missed the playoff by one shot. Even so, he hasn’t finished higher than 30th in the other three British Opens he has played.

So much of his mystique is built around that 2015 season — the Masters and U.S. Open, five victories, the FedEx Cup. So many of the expectations of Spieth now are measured against that season. Those are rare even for the greatest players, and it might be Spieth’s bad luck that it happened to him so early in his career.

He still wouldn’t trade it.

Asked to measure his game now compared with two years ago, Spieth said his long game is better, but he hasn’t been making putts. Such is golf.

“I recognize that being five years in now … and five years doesn’t make me a veteran, but it helps me realize kind of how things go,” he said. “And last year I was pretty caught in 2015. This year I’m not. Hopefully, we can have another one or two like that. But if we keep on trying to improve each part of the game, stick to the process, then we’ll have the results we want.”

Tuesday brought more sunshine to the Lancashire Coast and only a light wind that came out of a different direction. The course is fast, and balls are bouncing high when landing, which is links golf at its best.

In any conditions, Birkdale is not a course that leads to low scoring, certainly not like what Henrik Stenson had last year at Royal Troon when he set the major championship record of 264 in his brilliant duel with Phil Mickelson.

The lowest score ever at Royal Birkdale was 272 by Ian Baker-Finch in 1991.

Spieth still referred to the course as among the fairest he has seen in his limited experience at golf’s oldest championship. And when he looks around the landscape, he sees more balance of power than ever before.

Just two years ago, Spieth was considered part of the modern version of a “Big Three” that included Rory McIlroy and Jason Day. And then along came Johnson, rising to No. 1 in the world in February and leaving everyone well behind. But now Johnson hasn’t won since March, slowed by his slip down the stairs at the Masters. McIlroy and Day haven’t won at all.

“The younger generation, you look at how many good players there are,” U.S. Open champion Brooks Koepka said. “You look at how it was at Erin Hills. Everyone up there hadn’t won a major — Rickie (Fowler), Justin (Thomas), Hideki (Matsuyama).”

No matter who wins this week, Spieth doesn’t see that changing.

His big season in 2015 gave him a taste of it. The next two years, even with two victories in each one, gave him an appreciation of how Tiger Woods dominated for so long. He was asked the chances of there being another dominant force in golf.

“I wouldn’t get your hopes up,” Spieth replied. “What Tiger has done … having experienced a year like he continued to do for years, it just takes a lot out of you. It’s very tough to do. And you have to have a lot of things go right at the right times.

As for that streak of seven first-time winners in the majors?

Spieth spent only three semesters at Texas, though he used plenty of logic when he said that the 156-man field at Royal Birkdale has more players who haven’t won a major than who have.

“Chances are, it’s going to be somebody that hasn’t won one,” he said.