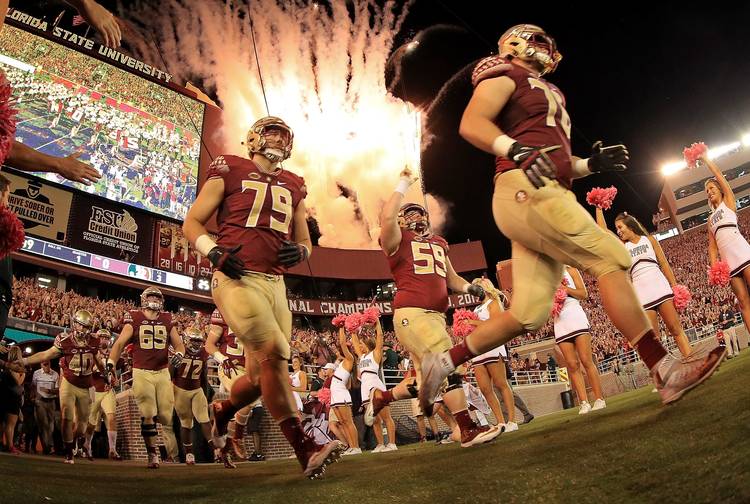 TALLAHASSEE, FL - OCTOBER 29: The Florida State Seminoles take the field during a game against the Clemson Tigers at Doak Campbell Stadium on October 29, 2016 in Tallahassee, Florida. (Photo by Mike Ehrmann/Getty Images)

Best-case scenario: A dominant front seven anchors one of the best defenses in the nation, and quarterback Deandre Francois builds on his impressive debut season as the ‘Noles play for the program’s fourth national championship.

Worst-case scenario: Departed running back Dalvin Cook meant more to Florida State’s offense than anyone in the program wants to admit, and Francois struggles to move the Seminoles attack with any consistency.

The key game: Sept. 2, Alabama. Games against Miami, Louisville and Clemson matter more for ACC title hopes, but the Seminoles have their eyes on a bigger prize. A win over Alabama in the season opener stamps Florida State as the nation’s team to beat.

Spring cleaning: Defense dominated the spring game, especially ends Jacob Pugh and Brian Burns. The pair combined for four sacks, four tackles for loss and multiple quarterback pressures. Expect them to ease the loss of Walker, who had 16.5 sacks a year ago. … The Seminoles’ 2017 signing class ranked sixth nationally, and only Alabama and Ohio State signed more five-star recruits; Florida State signed four of them — two running backs, a defensive tackle and a defensive end. Oh, the running backs were rated as the nation’s top-rated prospects, the defensive tackle also was No. 1 at his position (Houston Bellaire Episcopal’s Marvin Wilson) and the defensive end was ranked second in the country at his position.

Enter Cam Akers: Few freshmen in the country will draw as much attention as Cam Akers, one of those five-star running backs signed in February; the 5-11, 213-pound freshman from Clinton, Miss., could replace Cook. A high school hero who scored seven touchdowns in a state championship game in his final game, Akers enrolled early at FSU and earned offensive MVP honors in the spring game. He could start the opener against Alabama.

Making his move: Jameis who? Despite constant comparisons to former Heisman Trophy-winning quarterback Jameis Winston, redshirt sophomore Francois handled the hype during his first year as a starter. The dual threat with a cannon arm showed plenty of grit while throwing for 3,350 yards and 20 touchdowns a year ago, and he looks poised for his own Heisman campaign.

No. 3: Coming Thursday. Want a hint? This school produced the Houston Texans’ first pick of the 2002 NFL supplemental draft. He was an offensive tackle.