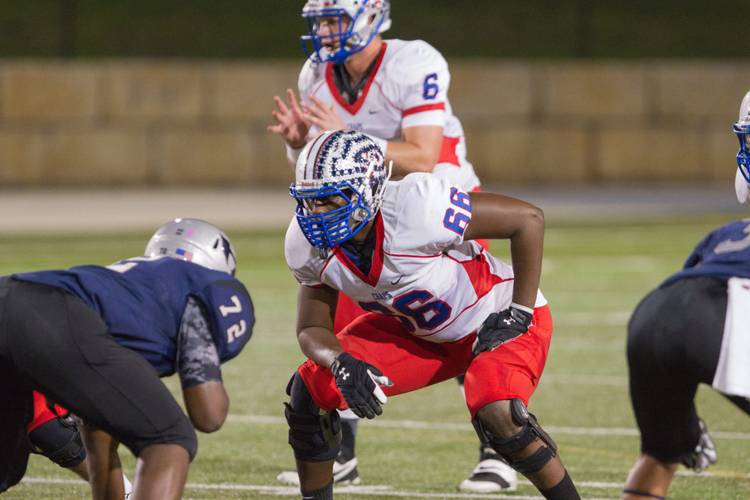 It appears Texas may be on inside track toward landing one of the nation’s hottest recruits.

You won’t find Calvin Anderson on the Fabulous 55, but the Rice offensive tackle has a list of offers just as impressive. Since announcing his intention to use his graduate transfer in January, some of the top programs in the country have come calling.

RELATED: The Dotted Line: The best- and worst-case signing day scenarios for Texas

In a recent interview with Sports Illustrated, Anderson told Bruce Feldman that Texas in the “first tier” within the top five schools he is still considering.

“The best way I’d put it now is that Texas and Michigan are first tier,” Anderson said. “Behind them is Auburn, and then [Oklahoma] and then TCU. It’s mostly fluid, though, from No. 1 through 4, with TCU a little less likely.”

If the name sounds familiar, that’s because Anderson is a former standout for Westlake and Georgetown. A 2-star recruit out of high school, he landed at Rice and quickly became a starter. He played on Georgetown’s 2012 Class 4A, Division I finalist team.

He’s also a wiz with a Rubik’s cube.

RELATED: Anderson solving puzzles on and off the field at Rice

Feldman reported that Texas was the first school to reach out to Anderson last month. The Longhorns got another boost when they hired Herb Hand away from Auburn. Hand was the first coach to visit Anderson, on behalf of the Tigers.

The self-imposed deadline for a decision is March 25, which is Anderson’s 22nd birthday. He still has course work to finish up on his degree in Mathematical Economic Analysis.

“What I think does act as a bonus to me, it would be cool to come back to a city that I know, but I don’t think that’s going to be a determining factor,” he told SI. “Where I go is going to be about what’s going to be the best opportunity for me to prepare for the next level.”

Preview: Texas vs. No. 12 Oklahoma