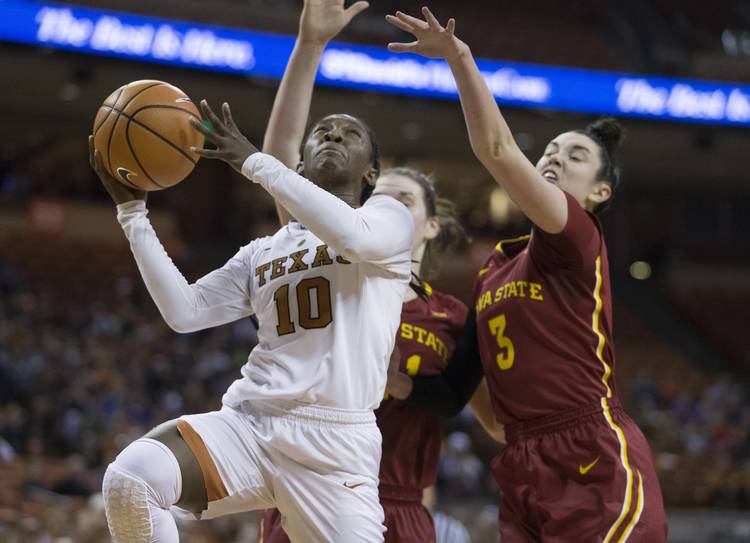 Iowa State raced to a 10-2 lead in the first quarter and never looked back. The Cyclones led 34-19 at the break. With nine three-pointers, the Cylones have made at least one shot behind the arc in an NCAA-record 734 games.

Texas won a pair of games against Iowa State this season, winning 87-55 in Austin and 72-59 in Ames. The Cyclones have an 18-16 all-time series lead against the Longhorns but Texas has won five of the last six games. Coach Bill Fennelly said ISU will have to player one of its best games of the year to beat Texas.

Carleton, who was named to the All-Big 12 first team this week, added, “It’s fun to compete against some of the best teams in the country and that includes Texas.”

Texas Tech (7-23) finished the season with a 12-game losing streak. After Candi Whitaker was fired in late December, the Lady Raiders went 1-18 under interim head coach Shimmy Gray-Miller. They were 6-7 at the time of Whitaker’s departure.

As for Iowa State, this marks its first victory in the Big 12 Tournament since 2013. The Cyclones had made four consecutive first-game exits before trampling Tech.

KANSAS STATE 72, KANSAS 63: In the tournament opener on Friday, Kaylee Page scored 20 points and the Wildcats outscored the Jayhawks 26-12 in the fourth quarter to advance.

Page was the game’s pivotal player as she hit five shots behind the three-point arc, three in the decisive fourth quarter. Kayla Goth was outstanding, too, pairing 19 points with a game-high 8 assists.

“I felt like I couldn’t hit a basket in the first half to save my life,” Page said. “And when the first (three-pointer went in in the second half it felt so good and I let ’em keep flyin’.