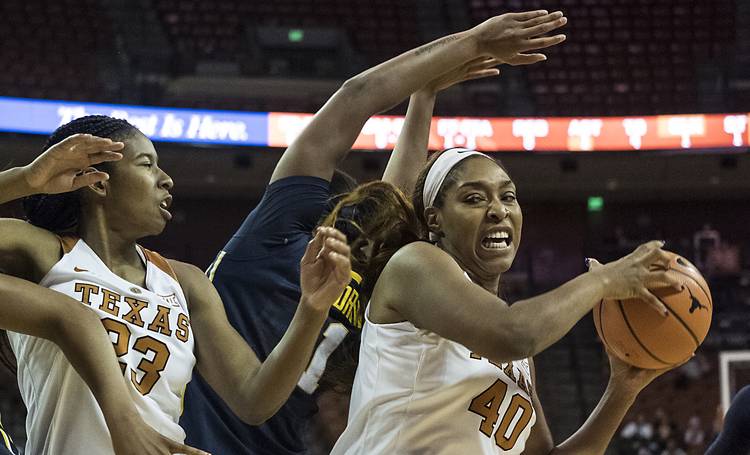 Texas Jatarie White, (40) has been a key player down the stretch as Longhorns prepare for NCAA Tournament. (AUSTIN AMERICAN-STATESMAN / For Rodolfo Gonzalez)

Texas will open the NCAA women’s basketball tournament at  home on Saturday against Maine. The Longhorns, who earned a No. 2 seeding, were placed in the Kansas City regional, the NCAA announced Monday night.

Also coming to the Erwin Center are Arizona State  and Nebraska.

The Longhorns, their coaches and roughly 300 fans attending a watch party erupted in joy when “Texas” came across the TV screen.

The tournament’s No. 1 seeds are UConn, Mississippi State, Louisville and Notre Dame. MSU is the No. 1 seed in the Kansas City regional.

Perhaps the most thrilled team in the field was Oklahoma, which danced on a tight wire but made the tournament as a No. 10 seed in the Spokane regional. The Sooners will play No. 5 DePaul in the opener. Oklahoma City also made the tournament from the Big 12.

There was an audible roar when ESPN announced that South Carolina is the No. 2 seed in the Albany Regional. With UConn as the No. 1 seed in the region, the Longhorns avoided the nation’s top-ranked team. The Huskies were named the tournament’s overall No. 1 seed.

Texas enters the tournament ranked No. 8 in the final Associated Press Top 25 poll.

This will be the third straight year the Longhorns play host to the first and second rounds of the NCAA Tournament in Austin. In 2016 the Longhorns defeated Missouri to reach the Sweet 16 and beat North Carolina State last year to advance.

This is the 19th time the Longhorns have played host to the tournament since 1983.

The NCAA Tournament represents the final games for three UT seniors — Brooke McCarty, Ariel Atkins and Audrey-Ann Caron-Goudreau. Caron-Goudreau has missed the last eight games with an injured wrist. Her status for the tournament remains day-to-day, according to UT officials.

The Final Four will be March 30 and April 1 in Columbus, Ohio.

Following three losses to Stanford, Texas finds itself unranked ahead of trip to Arkansas

Trigger warning: Texas, Nevada have faced each other in the NCAA Tournament before