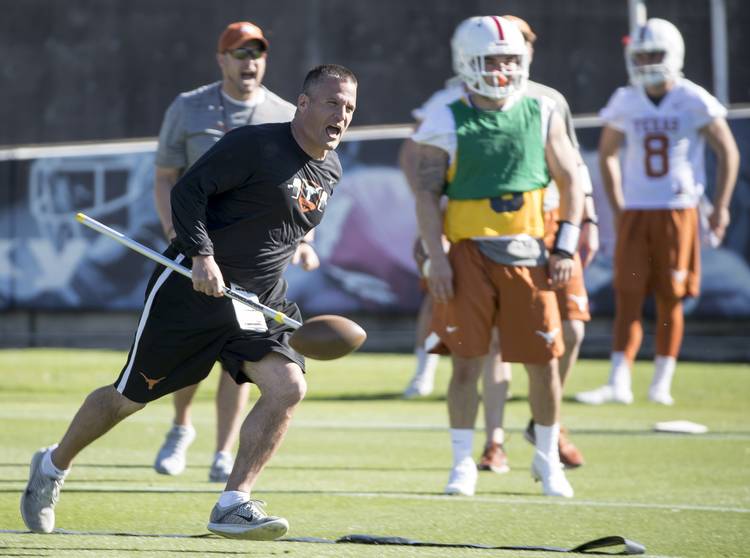 Texas held its fourth practice of the spring on Tuesday, and the media was granted access to around 20 minutes of drills. Here are three observations:

1. Former UT nose tackle Poona Ford arrived as we were leaving Denius Fields. Ford will participate in Texas’ pro timing day on Wednesday. On Tuesday, the Big 12’s reigning defensive lineman of the year got to scout his replacement.

Rising senior Chris Nelson ran with the first-team defense in Ford’s spot during a pursuit drill and another non-contract exercise. Nelson, who is recovering from an elbow injury that kept him out of the Texas Bowl, was still wearing a non-contact jersey and a brace on his arm.

Jamari Chisholm and Gerald Wilbon were the other nose tackles in the pursuit drill.  Chisholm ran with the second team during the non-contact drills. When Texas’ defense lined up against the offense for a drill that involved contact, Wilbon ran out for the first snap.

2. The media’s window closed as UT’s offense and defense squared off without their perimeter players. We did, however, see the defense pick up a win on one physical play as running back Toneil Carter fumbled.

Coaches have been concerned with Carter’s ability to hold onto the football since he arrived on campus for last year’s spring drills. Since he was suspended for the Texas Bowl for a violation of team rules, Carter’s last touch of the 2017 season was a lost fumble against Texas Tech. As a freshman, he ran for 252 yards and three touchdowns on 53 carries.

3. Even the special teams got physical. During one period of practice, a group of specialists that included kicker Joshua Rowland, deep snapper Jak Holbrook and punter Ryan Bujcevski worked on their tackling forms.

Watching the drill was Michael Dickson, who won the Ray Guy Award as UT’s punter in 2017. Dickson will return to campus on Wednesday for his pro day. Dickson is also Bujcevski’s cousin.